This post was originally published in July of 2017. Since our wild rose bushes are now blooming I thought I would share this.

When we bought our farm it was 7.6 acres of vacant land. It had been sitting untouched for many years and was overgrown with countless types of vegetation. It was so much fun exploring the property and discovering various trees, bushes, and wild flowers.

One of my great disappointments was when I realized that I was going to lose a beautiful wild rose bush when we dug our pond. “We will move it,” my husband said. We decided to plant it next to theses large rocks. Rocks that we had decided we would never move again.

We cut down the bushy part of the rose and dug up as much as the root as we could and replanted it next to the rocks. 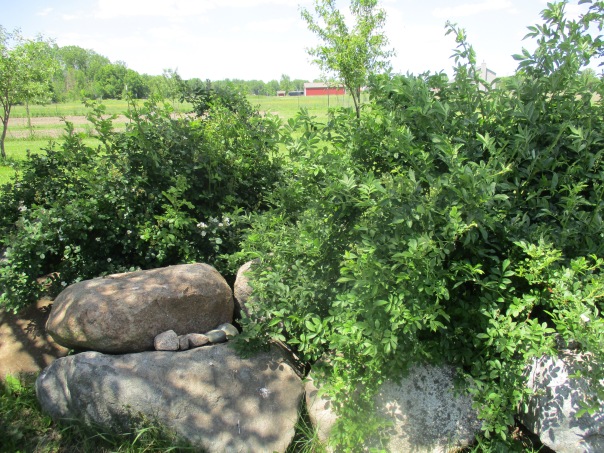 We have since found 4 or 5 more rose bushes which would need to be moved so we didn’t destroy them as we developed areas of the farm. All of theses rose bushes were replanted near the rocks in what has now become our rescue rose garden. 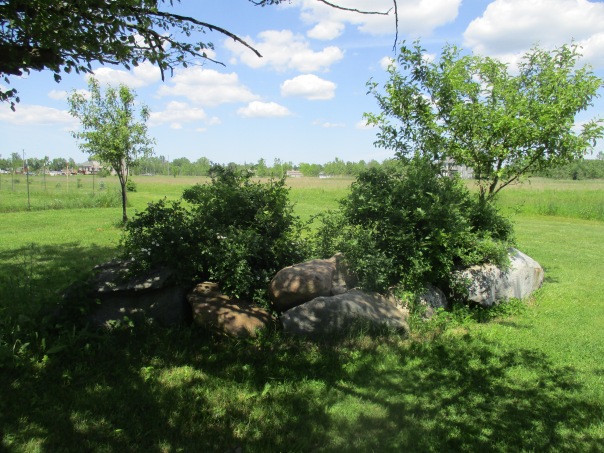 These rose bushes thrive in their new home.

I am always excited to see these rose bushes blossom in the spring and they have a lovely fragrance.

It is gratifying to know that we were able to preserve this beautiful part of nature.

Another rose story I want to share is what my husband and I are calling the mystery rose. The yellow rose bush was a given to me as a Mother’s Day gift from my children several years ago. My oldest daughter had picked it out, and she selected yellow because I had told her that bees tend to like yellow and pink flowers but not red flowers. That was something I read when I was researching honey bees. We planted the rose in the center of our prayer garden.

Despite giving it lots of TLC, watering when needed, fertilizer, and protecting it from the deer, the rose bush struggled. Last year I pruned it way down because the top had died off and dried up. I was sad because whenever someone gives me a plant it is a reminder of that person. In this case it represented my 4 daughters.

Several weeks ago my husband asked me if I’d seen my rose bush. “It has one blossom and lots of buds.” he said. A couple days later I was baffled as I checked on my rose bush. “That was a yellow rose.” I told my husband. “Now it has red blossoms.” He didn’t really remember it being yellow, but he didn’t accuse me of being crazy. To make sure I wasn’t crazy I looked back through my pictures and found the picture above.

I decided that there were one of two explanations for this change. The first one would be that someone had replaced the dead rose bush with a live one and had put in red rather than yellow. If this had happened I’m am certain I would have seen evidence of the digging and replanting.

The other thing I thought may have happened was that the yellow rose was a grafted bush and the root stock that was used was a red rose. I wasn’t sure if roses were grafted or if this scenario was possibly so I did an internet search.

This link from the MSU Extension explains that indeed my second explanation is plausible. http://msue.anr.msu.edu/news/why_are_my_roses_changing_color   Apparently I had pruned the rose bush down below the point where it was grafted. The root stock that was from a red rose was strong enough to survive and seems to be thriving in our garden. I do love this beautiful red rose and it will continue to remind me of my daughters.