My husband loves when I make homemade desserts and I love my husband, so shortly after we finished our blueberry pie it was time to make another pie. This time I decided on lemon meringue.  As I got out my Betty Crocker cookbook to find a recipe I was feeling sort of down because I was not using any of our home grown fruit for this pie. After reading the recipe I realized that even though we can’t grow lemons here in Michigan, the eggs that are used both in the lemon filling and the meringue topping came from our chickens. That made me feel better. 🙂 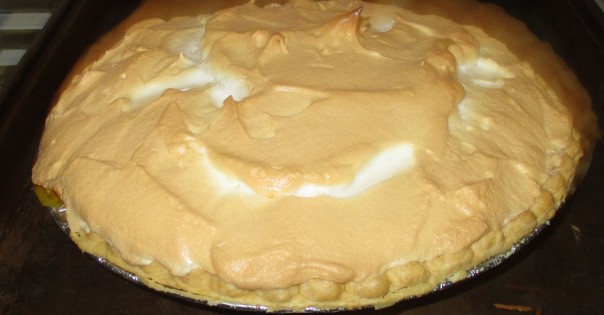 We then had a break from pies for a couple of weeks because the weather got pretty hot. Sometimes it is just too hot to do any baking, especially when we turn on the air conditioning.

Thursday, after the cold front came through and it was cool enough to open the windows, I decided it was time to make another pie. This time it was strawberry-rhubarb, one that  a couple of readers mentioned as being a favorite. I didn’t think I would be making this kind of pie this year because our rhubarb nearly drowned this spring. Thanks to my husband performing lifesaving maneuvers (digging it up and moving the roots to dryer ground) it is still alive, but it has not produced stalks big enough to harvest this year.

A couple of weeks ago my husband mentioned that Karen, our next door neighbor, had some rhubarb that was ready to be harvested. She had already picked all that she was going to use and said I should come and pick what I wanted. The next day, before I got a chance to get over there, Karen was knocking at my door holding two big bunches of rhubarb with the leaves already trimmed off. You gotta love neighbors like that! I gave her a couple of quarts of our strawberries that I had frozen and we were both happy campers.

I cut up the rhubarb and put it in the freezer… until yesterday when I was ready to bake my pie. There are many recipes for strawberry-rhubarb pie out there, but since I am not a huge fan of pie crust (I usually don’t eat that thick outer edge) I decided to make one with a crumb topping. 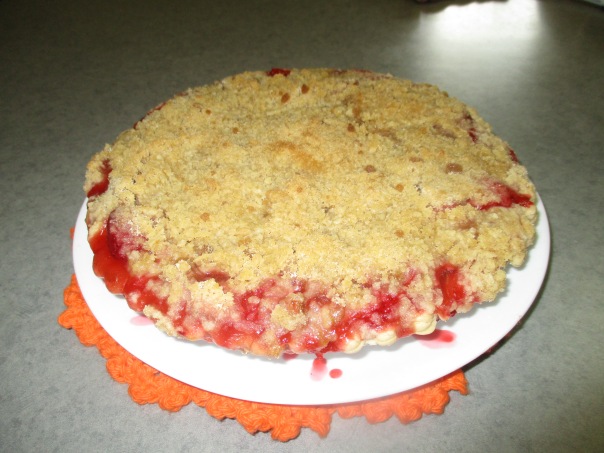 It is now evident that Autumn is quickly approaching and with that we have high hopes for both homemade apple and pumpkin pies. 🙂 I’ll keep you posted.

Do you have a favorite Autumn food?