I thought I would do a quick chicken update since when I talk to family or friends I often get asked how the chickens are doing.

The Barred Rock chicks, otherwise known as “The Six Pack”, made the move to the farm last week.

They started off in a small penned in area. They loved being on the ground where they could scratch and peck. Some of the older chicks were curious.

Scout loved being able to watch them. They were only in the penned in area for the first two days. On day three they ran out of the coop in the morning before we could round them up and get them in the pen. They are now free to forage the farm as they please, but they do stick pretty close to the coop.

Meanwhile the young Buff Orpingtons, A.K.A. “The Gang of Eight”, are doing well. They tend to stick together. 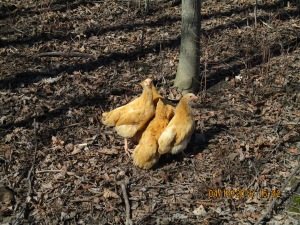 They are getting bigger. 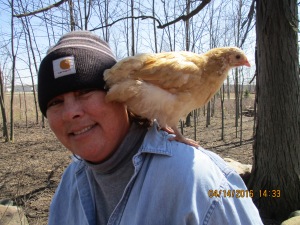 And they are very friendly. While sitting in a lawn chair near the coop we often end up with one or two or three of them sitting on our lap or perched on our shoulder. They are a lot of fun.

Sadly we lost one of our old Buffs to a hawk a couple weeks ago. She was from the first batch of chicks we bought. We had her since 2013. Her name was Super Chick. She got her name when she was young because she would stand in front of the gate when it was closed and fly up to the top. The way she flew up reminded me of Superman. She continued to live up to her name as she got older.  When we would leave the gate closed to keep the chickens penned in we would always arrive back at the farm to find Super Chick out of the pen. She usually didn’t stick with the flock, but wandered on her own a lot. When our younger rooster, Autumn, grew up he took a liking to her and he seemed to follow her everywhere. Autumn seems lost without her.

Loosing an occasional chicken to a predator is one of the risks involved in allowing chickens to free range.  However, the rewards of having happy, healthy chickens, reduced feed costs and fabulous eggs, have far outweighed the occasional loss of a hen.

The rest of the flock are enjoying spring time. The photo above is Autumn with a group of our Silver Laced Wyandotte’s.

There is lots of scratching and pecking to do this time of year.

This is Honey. She too is from our first batch of chicks. Honey won a special place in our hearts early on, as she would jump up on my husbands lap, peck at us if she wanted our attention, or squat down in front of us if she wanted to be picked up. Honey is also one of our two hens that have brooded chicks.

Our chickens are allowed to free range during the daylight hours and spend their nights roosting in the coop. As the daylight hours increase so does the amount of time the chickens spend outside. In the dead of winter the coop is opened up around 8 A.M. and closed around 5 P.M., but today they were ready to exit the coop by 7 A.M. and we probably won’t be able to close up the coop until 8:30 P.M. or so.  The chickens naturally return to the coop at night, but some of the young ones are still requiring a little coaching.

This time of year we too are ready to retire to our “coop” when darkness falls, but as the weather warms I am certain we will spend many evening sitting around a campfire long after the chickens have gone to bed.