With mid-term elections just around the corner I wanted to know ahead of time what all was going to be on my ballot. Through an internet search I discovered these two links that I thought I would share. The first is for the State of Michigan and the second I believe is a national site. With either site I can put in my address and it will show me all of the candidates for each position and all of the issues or proposals that will be on my ballot. (Who knew there are really 6 candidates running for Governor of Michigan?)

I will be doing some studying of these sites before going to the polls next week, and if you are going to cast your vote you might find these sites useful as well.

I am not much of a joke teller – mostly because I don’t remember them, so while it is fresh in my mind here goes –

What do you call the ghost that is haunting your farm???

(Many thanks to my husband who shared his experiences.)

Planning a party at the farm has always been at gamble – being outdoor parties we have always been at the mercy of the weather and parties need to be planned well in advance of any weather forecast. Mostly our parties have been in the summer and at least 90% of the time the weather has been perfect.

For several years we have talked about doing a Fall/Halloween party with a campfire and walk through the woods that we would decorate and pass out treats for the kids along the way. Several weeks ago we decided this would be the year. The party was planned for October 20th and we started watching the weather forecast 10 days before. It didn’t look promising – chilly, windy, chances of rain – not exactly what we were hoping for.

Early in the week my husband suggested we move the party into the barn. We could decorate inside, put the picnic table inside, use the propane lantern for light and set up a space heater. He would grill the hot dogs outside and keep a campfire going incase anyone wanted to sit by the campfire. I was thrilled that we would not have to cancel the party.

By Wednesday I had finished making my Halloween costume (costumes were optional) so I got busy making some decorations. I first searched the internet for some ideas then I searched my boxes of craft supplies to see what I had on hand that could be turned into Halloween décor. I had tissue paper in black, green, orange, red, blue, yellow and white. I found some Styrofoam balls and pipe cleaners. I also pulled out markers, glue sticks and a hot glue gun, a twist up glue stick, some yarn and ribbon.

We wanted orange and black crepe paper so we made a trip to the dollar store. While there I purchased a black poster board and besides a bag of tootsie pops that would be all that I needed to complete this project.

Below are some of the decorations I made.

Spiders – I twisted four pipe cleaner together and shaped them. I covered a Styrofoam ball with black tissue paper then tied a piece of yarn around it to hold it in place. I left one long end of yarn to hang the spider from like it was dropping from a web. I used hot glue to glue the head to the legs. I tried using marker to add eyes but it did not show up on the tissue paper, so I found an orange paint pen that worked perfectly. 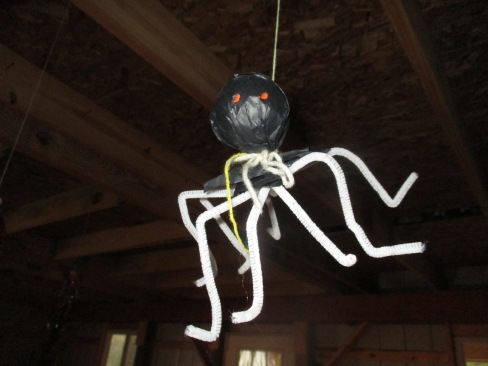 Bats – I cut wings out of black tissue paper and bodies out of black poster board. I used a glue stick to attach the wings to the body then used a sharp tapestry needle to run the sting through the bats body, again leaving a long end to hang it from. My orange paint pen was again used for the eyes.

Ghosts – I covered the tootsie pop suckers with Kleenex and tied it with ribbon to make ghosts. Originally I planned to hang the ghosts so I left a long end on the ribbon. When we tried hanging the ghosts I we found that they would only hang upside down because the head (sucker) was so heavy. I decided to put them in a basket since I wanted to give them to guests anyways. I found an old Easter basket and decided that would work. I stuffed it with black and orange tissue paper and so the ghosts would stand in the basket. I cut the long part of the ribbons off each ghost. I then decided to tie them onto the basket handle to make the basket look a little less Eastery.

This basket of boos (LOL) was used as a center piece and guests could help themselves. 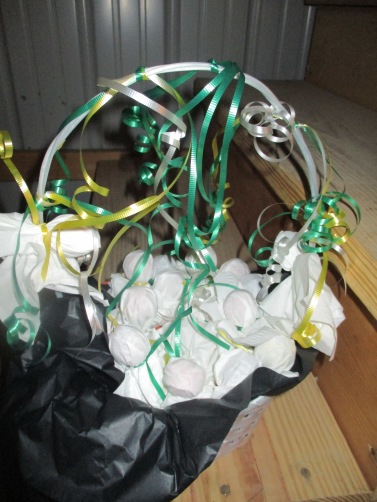 My husband and I usually carve pumpkins together each year even since the kids have moved out. This year was no exception. I started out carving the basic jack-o-lantern because I am really not very artistic but after seeing my husbands skeleton I decided to try to make a bat. I think they all turned out pretty cute. 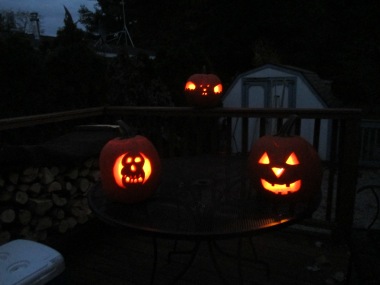 Saturday came and the weather was erratic. Sunshine, cloudy, rainy, hail, more sunshine, windy, more rain and it seemed to change from one to the other in a matter of minutes. Despite the weather most of the people we invited showed up.

Below are a few photos from the party.

A few guests (mostly the kids) came in costume. 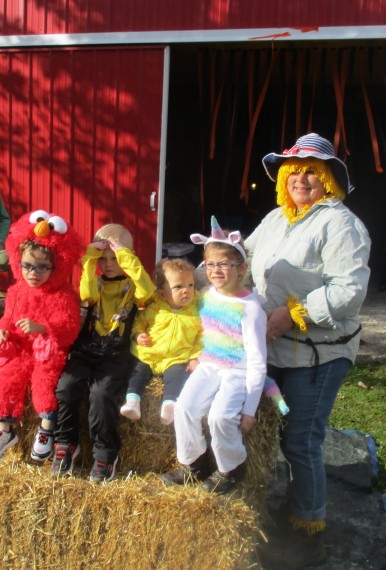 In the above picture our Grandson Jackson is dressed as Elmo. Dressed as Bumblebee (The Transformer) is our Great Nephew – Landon. Our Granddaughter Adeline is dressed as a pineapple but she didn’t like her hood on. Our Great Niece – Kenzie is the unicorn. In case you haven’t guessed I am the scarecrow on the end. 🙂 I think Aunt Donna (our Christmas Elf ) was snapping photos instead of having hers taken.

The straw bales that the kids are sitting on also served as their play ground. My husband had them covered with a tarp during the morning rains and when the sun was out and the kids arrived he set them out for the kids to play on. Each time a rain shower would come up the kids would retreat into the barn and my husband would cover the straw only to uncover it again when the sun came back out. 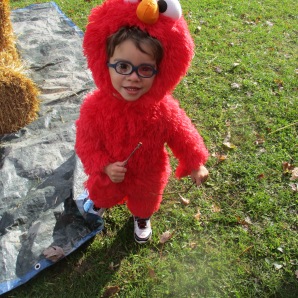 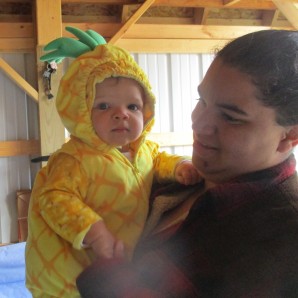 Elmo and our pineapple with her Momma. 🙂

Our menu was simple – home made potato salad, grilled hot dogs, baked beans, chips and dip, and Aunt Donna’s Monster Cookies served with apple cider to drink. We also uncorked and shared a couple bottles of my father-in-laws wine – a sweet wine he calls Tom’s Blend. It was a big hit.

Talking, laughing, hugging, loving – four generation of family – Aunt Donna, all three of my sisters with all four of our husbands together (that doesn’t happen often) – some of our kids, some of our grand kids, the young ones playing on the straw bales and being excited about the treats we passed out. It wasn’t the food, or the decorations, or the costumes that made it a great party – it was the people and the time we shared together and I am so thankful we didn’t let it rain on our party.

Thanks for visiting and in case you haven’t figured it out – It’s a bat mobile – LOL.

With the threat of frost looming I decided that a herb harvest was in order.

I collected these yesterday. (Are you singing? I was singing in my mind while I cut these.) After dinner I planned to come back for chives and lavender. I didn’t make it back and this morning frost blanketed everything. I was, however, thrilled to find that none of the herbs had been affected by the frost. I was able to harvest chives, spearmint, chocolate mint and lavender today.

I wasn’t the only one interested in the lavender. There were many bumble bees flying from blossom to blossom – collecting nectar I presume. Not wanting to take it all from them, I only harvested about 1/2 of the blossoms.

All of these herbs will be dried, then some will be used for culinary uses, others will be infused into oils for use in soaps or balms, and some (spearmint and or chocolate mint) might be infused in vodka since we enjoyed it the last time I made it.

Now that we have had a frost there are other things that can be harvested; these include rose hips and horse radish. Look for a future post on how I will be using them.

Thanks for reading and until next time – be well. 🙂

We didn’t have a great pumpkin crop this year, but we did harvest a few. Today as I was cooking some up to make pumpkin pies I was reminded of this post from 2015.

It’s that time of year. Fall is fast approaching (it arrives this Wednesday in fact) and the harvest is in full force. In fact some of the early crops, like summer squash and green beans might be finished producing, but the late crops like pumpkin and winter squash are just getting ready to be picked. While pumpkins are popularly grown for their use as fall decorations, and people often buy them to make jack-o-lanterns for Halloween, I’m afraid many are missing the true value of pumpkins.

On our morning local news channel last week, there was a segment where a heart doctor was interviewed and he spoke about the health benefits of pumpkin. He touted the large amounts of vitamin A and fiber as the main reasons to eat this heart healthy food but check out this link for more detailed reasons. http://www.huffingtonpost.com/2014/09/04/pumpkin-health-benefits_n_1936919.html