My daughter Kara, who will turn 23 this Wednesday, was only four or five years old when she asked, “Mom, why can’t God babysit us.” Since Kara was my 3rd child I guess I was somewhat prepared for questions like this. My response was something like this. “God does take care of us all, but God made me your mommy and He gave me the job of taking care of you and making sure you are safe and have the things you need, and when I can’t be with you I have to find another person, that I trust, to do that.” Kara seemed satisfied with my answer.

I took my role as their mother seriously. When I was with them it was hard to let them out of my sight. When someone else was caring for them I expected that they too would be monitoring my child’s every move. As my children have grown one of my biggest challenges has been letting them go off on their own, not knowing where they are, what they are doing, or who they are with. I hope that their upbringing has taught them to be responsible, to make good decisions, to stay safe, and I pray daily and trust that God will guide them and protect them. It is only my faith in God that relaxes my worries.

Last July when Kara’s 1998 Honda Civic, that had well over 300,000 miles on it, gave out on her, my husband and I decided to give her the car that he had inherited from his mother. The 2005 Dodge Neon had a mere 11,000 miles on it, only a few surfaces scratches, and still had it’s new car smell. It had been my Mother-in-law’s pride and joy. She loved her little red car. 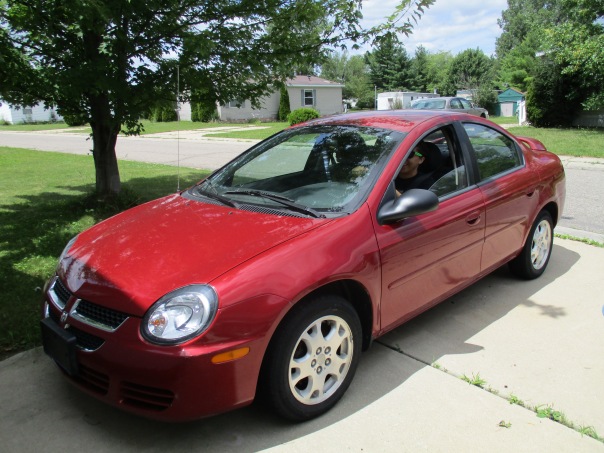 When we gifted her the car we told Kara that Grandma Chris’s spirit would be riding with her, and yes, we believed it to be true.

A few weeks ago I answered my phone around 5:30 pm on a Thursday, and Kara greeted me saying, “Mom, I just had and accident, I’m ok but my car isn’t.” My first thought and probably my first words were, “Thank God you are okay.” As the conversation continued I learned that she was on I-94 near Nine Mile Road, her car had hydroplaned on the wet roadway and went off the road, there were no other vehicles involved, the police were on their way, and we decided she would call a friend to come pick her up and take her home.

Later that evening Kara told me the whole story. She was driving in the left hand lane, keeping up with traffic, when her car began to hydroplane. She first went off the left hand side of the road but in trying to regain control she apparently over-corrected sending her car back across three lanes of traffic, up the embankment on the right-hand side then back down before coming to a stop. It seemed miraculous that all of the traffic traveling with her or behind her, during this rush hour,  somehow managed to avoid collision with her out-of-control car. I told Kara that her angel must have been with her. I also repeated this when I told the story to my husband.

The following day, when talking to my dad on the phone I told him “Kara had an Angel riding with her,” I then went on to tell him the story of her accident and how we had told Kara that Grandma Chris’s spirit would ride with her. He, too, thanked God that Kara was not injured and that no one else was involved in the accident. We went on to talk about other things and as I stood looking out our living room window a cardinal flew into our cherry tree. I mentioned the cardinal to my dad, and he told me he had recently read that there is some spiritual significance when you see a cardinal. He couldn’t remember exactly what it was.

After I got off the phone I went back to my housework. I didn’t think about the cardinal again until the next morning. When I did and internet search I discovered that it is said “When a cardinal appears an angel is near,” some also said the a cardinal is a visitor from heaven, or a visit from a loved one that has passed on. I knew immediately that the cardinal was my mother-in-law confirming my belief. I felt peaceful and grateful. I shared the story with my husband and he agreed that I had a visit from his mom, Kara’s angel.

Later that day I realized God’s sense of humor when I called Kara to share the story. I first asked her if she was busy. She said she was at a football game. I quickly shared the story of talking to my dad and seeing the cardinal and learning the meaning of seeing a cardinal and that I believed that this confirmed that Grandma Chris is her angel. When I was finished Kara said, “Mom, the strange thing is the team that we (the Wayne State Warriors) are playing is the Cardinals.” I wasn’t sure of the significance of this but I found it funny. So much so that I was still laughing out loud 20 minutes later when my husband came home. When he asked, I told him that God has a great sense of humor.

This past year I have completed several crochet projects, and I thought I would share the highlights. Since I found all of the patterns online I have posted the link for the pattern along with my finished results.

I was attracted to this first project because it is also call an Apiary Puff Blanket or a Beekeepers Quilt.

This was definitely the most time consuming project that I did this year, first crocheting 108 small hexagons then stuffing them and sewing the two sides together, finally sewing the stuffed hexagons together into a quilt and adding a boarder. Fortunately I started this project in January when the weather was keeping me indoors a lot. I had it finished sometime in March and presented it to my “mommy-to-be” daughter. I told her this was to keep my “Little B(ee)” warm. “Little B” has since become my nickname for my grandson Jackson. 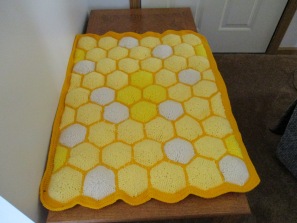 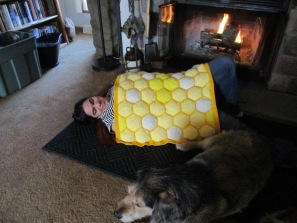 Since the quilt was too heavy to cover or wrap an infant in, I also decided to make this hooded baby blanket.

I not sure why I don’t have a picture of this blanket when it was finished. I did love the crochet pattern of the blanket but could not get the hood part to fit, so I left it off and made a matching hat instead.

Again inspired my Little B, and knowing he would be coming home from the hospital when the weather was cool, I decided to try my hand at crocheting a sweater.

I did change the edging on this pattern because I thought the pattern, as written, was a little to girlish. 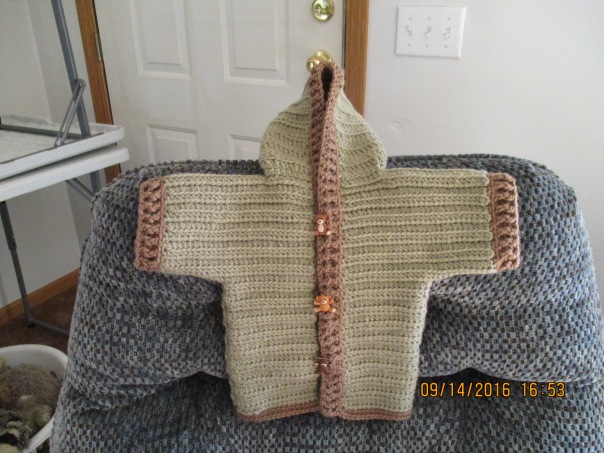 Since I still had a lot of stuffing left over after stuffing the hexpuff blanket, I decided to try stuffed animals. This bear is the result of my first attempt. He was also gifted to Little B. 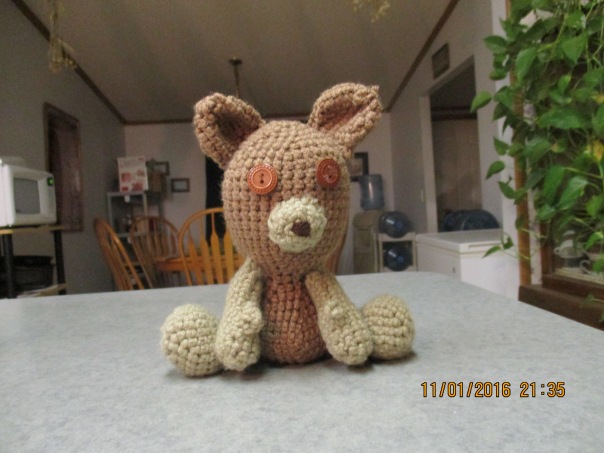 A few weeks ago my sister emailed me this link and asked how hard it would be, so I did a sample.

It is not real difficult, but I think I might need to use a bigger hook so the cat pattern shows better. 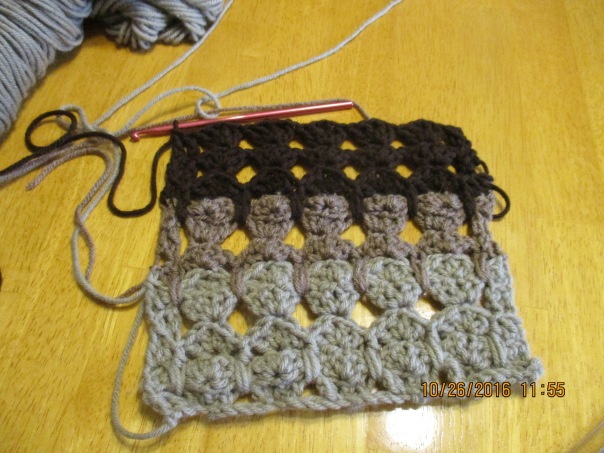 Lastly, I was going through some of the patterns I had, and I came across this scarf. My sister has given me this pattern over a year ago, and I had began making one. When it wasn’t coming out right I put it down and went on to other projects.

I decided to attempt it again, and this time the I am very pleased with the results. 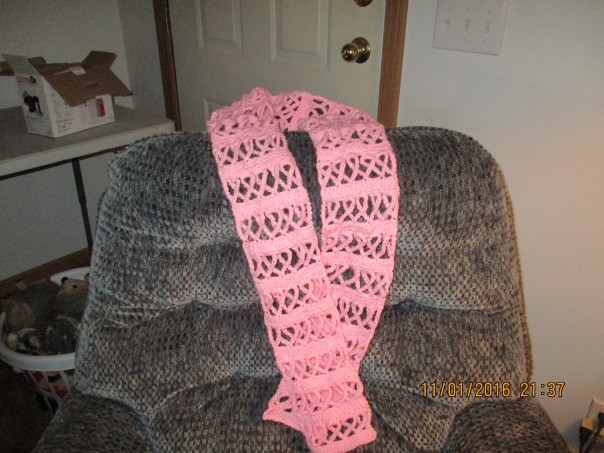 As the daylight hours grow shorter and the weather grows colder I’m sure I will be spending more time crocheting. Hmm… what will my next project be?