As January comes to a close I decided to write a post about my crafting projects for the month. I picked the title then when I began reviewing the projects I realized that the title, That’s A Wrap, actually seemed to be a theme for this month.

You might remember that in the beginning of the month I wrote about the first hairpin lace project I made. 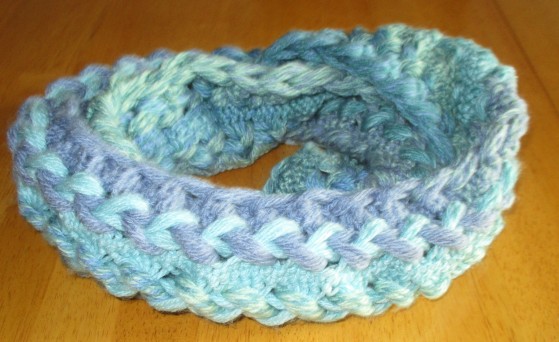 I then decided to do a second hairpin lace scarf with a different type of yarn. I didn’t make it an infinity scarf this time and I had enough yarn leftover to make a matching ear warmer. 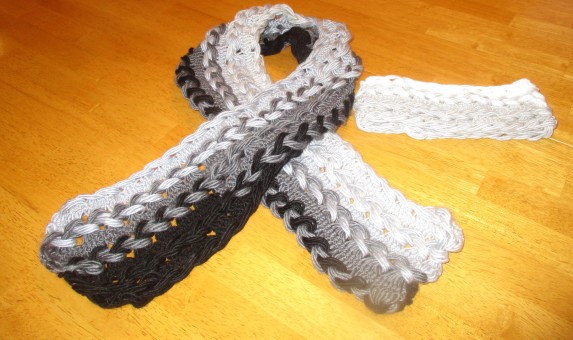 Next I decided to make a scarf using the broomstick lace method that I have done in the past. I thought it might be interesting to compare the two to find out if I preferred one method over the other or if I preferred the results of one over the other. I can honestly say I don’t have a preference. (Do you?)

I plan on finishing up this scarf later today but might make a matching ear warmer. 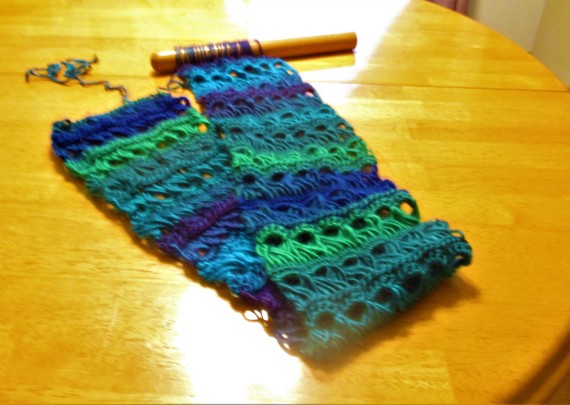 The other big project that I completed this month was making my bath robe. I think it was back in November when I wrote about my plans to make this. I had purchased the fabric and thought I would get started soon. Before got I started on the bath robe reality struck and I switched my attentions to making Christmas gifts instead.

Fortunately I waited, because making the bath robe was not as easy as I expected it to be. I am not going to go into detail about all of the mistakes that I made, but I do want to share some thoughts about the fabric that I used.

My choice of fabric for this project was Luxe fleece and to be fair to the pattern designer it was this choice that lead to a lot of the difficulties I had with making the robe. What I do love about the fabric is that it is super soft and warm and even though I usually don’t wear purple I do love the color and how it looks with the contrasting trim. I did, however, find it difficult to work with this fabric while making such a large garment. There was a lot of bulk in the way while trying to sew. The fabric is not one that can be ironed. so pressing seams in place was not an option and the fabric did tend to slip so many pins were required to hold things together until the sewing was complete. The other thing I will mention is that my small straight pins tended to get lost in the fabric so I had to do several checks to make sure I removed them all. (OUCH!) The last issue that I (we) had with the fabric is that the fabric sheds when it is cut and continues to shed until it is sewn together. Each time I worked on this project I made a big mess. Fluffy stuff everywhere! My husband actually offered to bring in the snow shovel for cleaning it up, (LOL!) but the vacuum worked just fine. 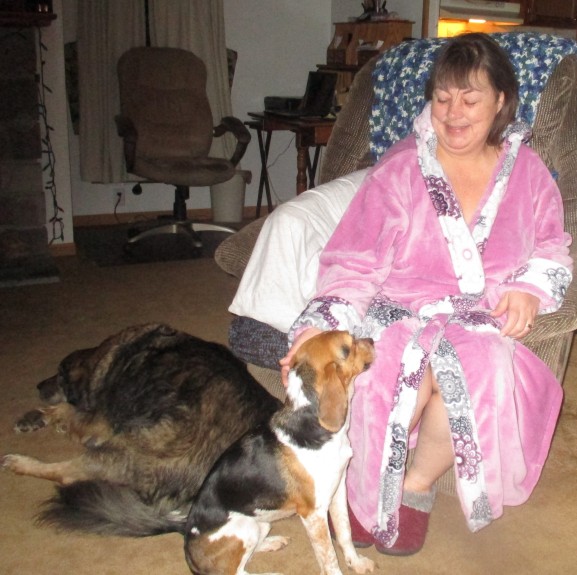 My wrap around bath robe. That’s a wrap.

Incidentally Ranger got in on the action as well. One day last week he seemed to be getting bored while waiting for his afternoon walk. I cooked up two beef bones (one for Ranger and one for Trooper) thinking that chewing on a bone would keep him busy while he waited. We have an old table cloth that we put on the floor when we give them bones so they don’t mess up the carpet. I placed the two bones on the table cloth and invited the boys to enjoy their treat. Trooper sniffed his but walked away apparently uninterested. Ranger was niffing the bones as I returned to the kitchen to continue what I was doing. A few minutes later I walked through the living room and noticed that one of the bones was covered with a corner of the table cloth. Ranger was sniffing the other bone. A short while after that I discovered that both bones were buried in the table cloth. Apparently Ranger was planning to save them for later. LOL! 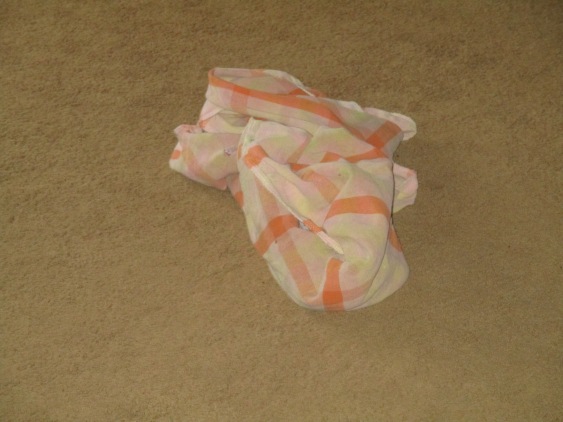 Bones buried in the table cloth. That’s a wrap. (I wonder if he could learn to fold clothes. LOL)

Thanks for reading and please feel free to share your thoughts in the comments section below.

Click here to learn more about my “55 Things” series and here to view previous posts in this series.

It was a Saturday morning when I was driving with my two youngest daughters to pick up my two older daughters from a friend’s house where they had spent the night. Kara (age 7) rode in the front passengers seat and Lindell (age 4) sat on the bench seat directly behind me.

Along the way Lindell began asking me questions about God. “Where is God?”

“God is everywhere,” I replied.

“Is He sitting right here next to me?”

Lindell seemed content with these answers and the conversation ended as we arrived at our destination.

After retrieving the older girls Kara and Lindell returned to their spots in the van while Tina (age 12) sat next to Lindell and Hanna (age 10) sat in the third row.

My focus was mostly on driving when suddenly Lindell screamed  “MOM!”

I nearly stomped on the breaks  at the alarm in her voice. “What’s wrong Lindell?”

“Tina is sitting on God!”

It’s been nearly four weeks since Ranger became part of our family, so I thought I would share a little about how that is going.

I’ll start by addressing the title of this post – it may be a little misleading and make you wonder what the heck kind of animal did we adopt. The truth is that there is one real danger in Ranger and that is that he will steal your heart and make you fall hopelessly in love with him. 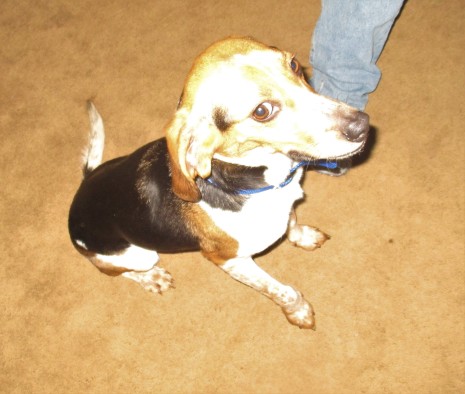 Here is how it happened to us.

He started by looking at us with those captivating puppy dog eyes that are framed by his adorable floppy ears, and when we look at and/or speak to him he wags his tail in sheer joy. Then, as if he hadn’t already won us over, once we sit down to relax he bounds up in a lap and insists on some cuddle time.  At  times he will even bring his tennis ball and ask to play a game of fetch. Is there anyone who could resist such love? 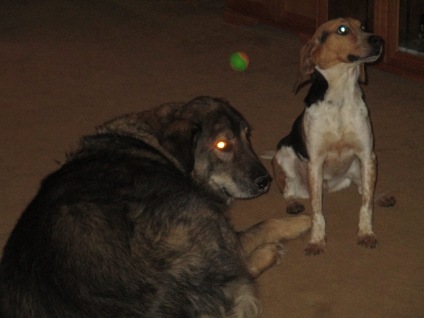 His approach with Trooper is different of course. Instead of using their eyes to get to know each other dogs use their noses. Ranger will sniff Trooper then stand nicely and let Trooper sniff him as if proving to Trooper that he really is a good boy. He will also sometimes walk up to Trooper and begin licking his face – that is just so cute. Ranger likes to engage Trooper in play so he will jump toward Trooper and bark then jump back or begin sprinting from one end of the house to the other trying to get Trooper to chase him. Trooper plays along by trying to tag Ranger and huffing or barking at him as he runs past. Although Trooper doesn’t have nearly the energy that he use to, and is not able to keep up with the pup, it is good to see him playing along. The barking during playtime can make it sound like they are fighting, but as long as their tails are wagging we know it is all in fun. 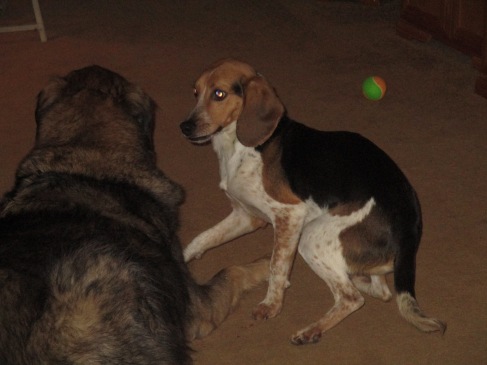 Ranger really has come along way since that first day we brought him home, when he didn’t know that he had to go outside to go to the bathroom; he continually put his feet up on the counter when I was working in the kitchen; he begged for our food when we were eating; and my husband found himself making a 4:30 a.m. trip to the store to buy him a raw hide bone.

I think it’s been a couple of weeks now since he has had any “accidents” in the house and as long as we make sure he gets out at regular intervals I don’t feel like I have to be watching his every move. He has learned that he gets fed at his dish, so begging for our food does him no good. He will still put his paws on the edge of the counter sometimes but I get the feeling it’s because he just wants to know what I am doing and perhaps he even wants to help. LOL!

I think it’s been about a week now since we stopped putting him in his crate over night. He now sleeps in his own bed right next to my husbands side of our bed. He settles into his bed when we go to bed or sometimes even earlier, and he sleeps through the night. Even when we are up earlier Ranger has been sleeping until at least 6:00 a.m. If he does get up around 6:00 it is just to go outside to go potty and then he will go back to bed until it is almost time to go to the farm to open up the chicken coop and go for his morning walk. GOOD BOY RANGER! 🙂

While there is much more to tell I decided to keep this short so I could get it published.  You see it seems that each day Ranger is displaying new behaviors that we are happy with, and since there is still a lot for him to learn you can look forward to more puppy tales in the future.

Click here to learn more about my “55 Things” series and here to view perivious posts in this series.

Here in Michigan this is the time of year when the winter blues, or what is now referred to as Seasonal Affective Disorder (SAD), is setting in. The short hours of daylight coupled with the scarcity of sunshine can have a negative effect on our mood.

Today I am sharing a photo that I love. I always say that yellow is a happy color and when I see sunflowers (and dandelions) I see feel like they are smiling at me. 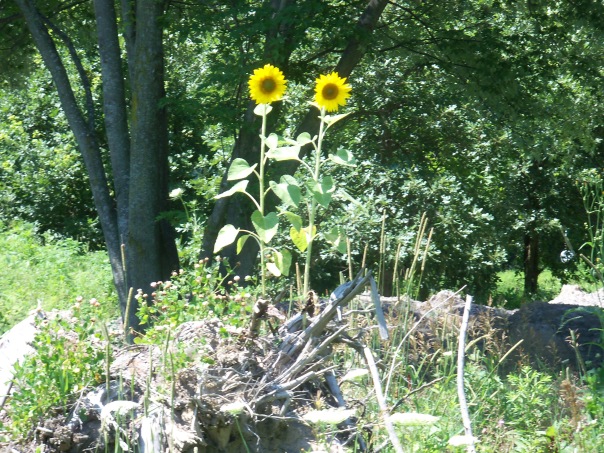 Perhaps this will help chase away the winter blues.

Wishing you sunny days and lots of smiles. 🙂

Click here to learn more about my 55 Things series.

This plaque hangs on a wall in a corner of our dining room. 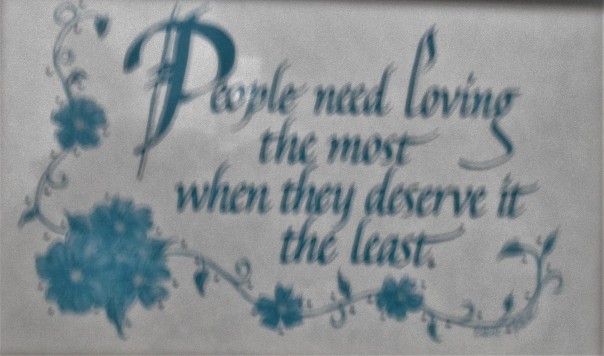 I love the message, “People need loving the most when they deserve it the least,” and I believe it is often true. Many times what we see as “bad” behavior is a person’s reaction to pain, fear, frustration, insecurity or even loneliness. If we can see beyond the surface and offer some love, kindness and understanding I believe we have the potential to change lives for the better.

I have thought several times that I should move that plaque to a place where it is more prominently displayed, because even though the words are engrained in my mind, it is not in a location where others are likely to read it. Today I decided to do one better – share this message here, where it can reach those who might visit our home and many, many more.