Tuesday’s warm temperatures allowed me to get into the garlic field to do some work. If you are growing your own garlic this is a job that you shouldn’t have to worry about, but I decided to write about it so that others can learn from our mistakes.

My task for the day was digging green garlic. The garlic that I was digging were not the cloves that we planted last October for harvest this July. This patch of garlic was coming up seemingly independently. What happened was when we planted last years crop, in the fall of 2015, we planted a short row of small cloves that we thought we would use as a test row to try out the potato digger that we hoped to use to harvest the garlic. That row went largely neglected (unweeded and unfertilized) last year as it was not really figured in as part of the crop that we would sell. When harvest season came the condition of the soil was so dry and hard that using the potato digger was out of the question. That short row of garlic also went unharvested.

When my husband tilled the area to prepare for the next planting those garlic plants were tilled under. It is very apparent that many of the cloves from that unharvested garlic survived the tilling, as they sprouted up along with the garlic that we planted for this years crop. 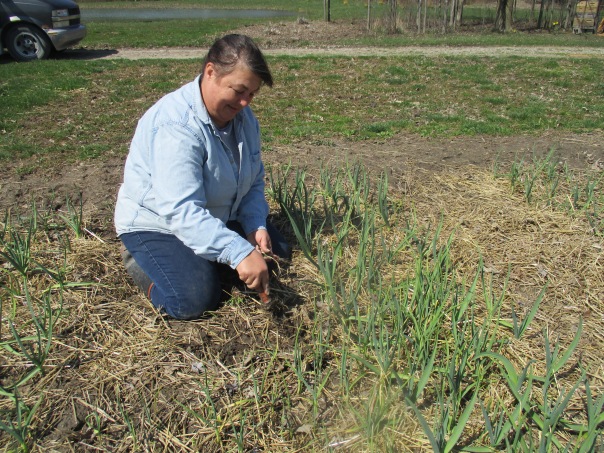 More garlic coming up would be a good thing except that they were coming up amongst the garlic that we planted for this season. If left in place they would be too crowded which could reduce the size of the bulbs.

Needing to get rid of them, but not wanting to waste them, I decided to harvest the greens. These are referred to as green garlic. Normally to harvest green garlic I would just snip it at the base of the plant and leave the roots in place, but since I did not want this to grow back up I needed to dig it. The job was somewhat complicated by the fact that the soil was still pretty wet and therefore sticky mud, also many of the plants were growing sideways so the roots were not directly below the greens. I spent several hours Tuesday with my hands and knees in the dirt and filled up a paper shopping bag with green garlic.

When I took home the bag full of green garlic Tuesday evening I wasn’t sure exactly what I was going to do with them. I started by clipping all the roots off that evening. I would decide more in the morning.

Tuesday morning I decided my next step was to clean the greens. For several reasons I decided I was not ready to send these to market. Mostly because people are not familiar with buying and using green garlic, so before market it I need to learn a little more about it myself. I need to know the best way to store them and how long the will keep. I need to experiment so I can educate others.

I expect that they will keep well for a while in the refrigerator, but they do need to be sealed in a bag to prevent the garlic smell from adulterating other foods. So I put a sealed bag of greens in the veggie drawer in the refrigerator. I’ll add some to my salad this weekend.

I then decided to see how well they would dehydrate. If they maintain their flavor they would be even better than dried chives in my opinion. Using scissors I cut them into small pieces and loaded my dehydrator. I set the temperature at 90 degrees and checked them every few hours. It probably took about six hours to completely dry them. I was quite happy with the flavor that was retained through the drying process. A word of warning for anyone who might attempt this: the dried greens are very light weight and confetti-like; the least amount of movement can make them blow around. Many of the green flakes ended up on the counter and even the floor. So move cautiously around them and DO NOT open the dehydrator when it is still running!

My sister and my aunt who stopped by while I was cleaning the green garlic were each given a bag and we talked about ways to use them. I hope to hear back from them how they used them and how well they liked them. 🙂 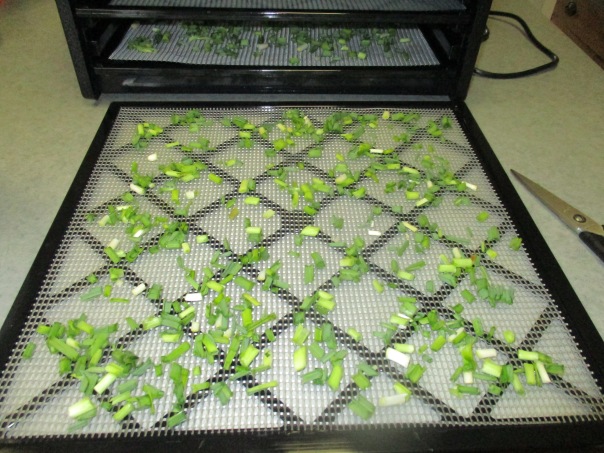 I had enough to fill the dehydrator again on Thursday so I did a second batch. I’m sure my husband will agree that dehydrating garlic should come with this WARNING: Do Not Try This At Home. During the first few hours of the process the smell of garlic is over powering. We opened windows and put in a window fan blowing outward. We also agreed that in the future when we dehydrate garlic it will be done outside.

In conclusion, I highly recommend growing (and eating) green garlic, so watch for future posts about where I will be intentionally growing it. 🙂