Just a quick update – I am attempting to use the spinning wheel for short periods nearly every day, but I can’t say that it has “clicked” yet. I can’t seem to get the bobbin to take up the twisted fibers, though yesterday it did for a very, very, brief period. I’ve read this is a common problem for new spinners. I know my fiber is getting over twisted. I have watched many videos and they all make it look pretty easy. They advise to treadle slower and tighten the tension, but they don’t show repeated trial and errors until they get it right. While a video like that might be reassuring to the new, struggling spinner (me) I don’t suppose I (or anyone) would want to sit through it. So I’ll just keep trying, and like I said before I let you know when it “clicks”.

I have continued to do a lot of crocheting, and knowing that I can create things out of yarn keeps me motivated to learn to make (spin) yarn. 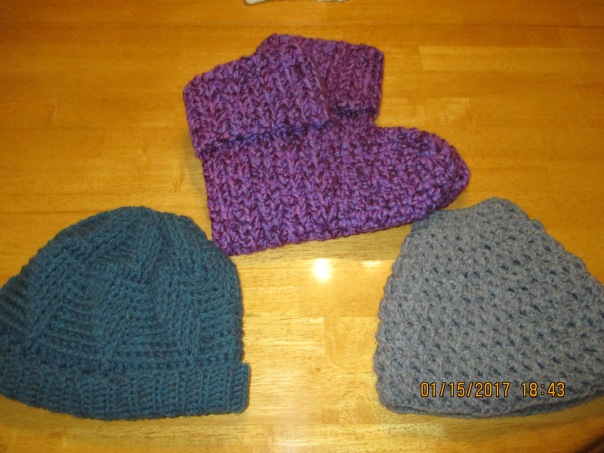 I didn’t make the purple slippers for any particular reason, but an extra pair of slippers is always a good thing on hand. It’s a pretty simple pattern that I don’t even have to read anymore. So I can whip these up pretty quickly. I found a free pattern on-line for the hat on the left. When it was finished, and I tried it on, I discovered it was a little small for me. Upon hearing this my husband tried it on. He really liked it and adopted it for his own. I’m currently making another one using the same pattern but with a larger hook. While talking to my sister recently she told me that “ponytail” or “messy bun” hats were becoming very popular. After looking at some patterns I decided to make one. Rather than print out a pattern, I decided to use a stitch that I like and see if I could make one up. The results are the grey hat on the right. It fits me pretty good. Yes – this will definitely work when wearing my hair in a ponytail.

I’ve also been catching up on making soap. One of the nice things about making soap is that this can be done during the time of year when other activities (specifically outdoor activities) can’t be done. After the holidays my supplies were getting low, so my plan is to make one batch per week until I get caught up. I currently have Pumpkin Spice (ready in 3 weeks), Aloe (ready in about 4 weeks) and Coconut Soap (ready in about 5 weeks) curing.

Since we still have a lot of strawberries in the freezer from this years crop I decided that I could use 3 quarts to experiment with making a batch of wine. I first read some recipes online. Since I didn’t follow any of them precisely I won’t source them, and since I don’t yet know how my wine will turn out I’m not going to give you my recipe either. I defrosted the strawberries then mashed them. I added sugar, then boiling water. After this had cooled I added my yeast. I stirred it daily and I could smell and taste that it was becoming alcohol. Yesterday, after about a week in the crock, I strained the mash and put the wine in a bottle with an airlock for the process to continue.  It will probably be a few weeks before that is complete. After that it should probably age for several months, but if we really like it that probably won’t happen.