Recently we have been spending some of our evenings fishing in our pond. When we stocked the pond we wanted fish that were good for eating, so we chose catfish, perch and walleye. We also put in a few pike and lots of fathead minnows.

When we tell people that we have perch and walleye in our pond we get mixed reactions. Those, like me, who know little about fishing and fish habitat take us at our word. They have a simple “that’s nice” attitude about it, but it is not a big deal. More seasoned fishermen, however, have one of two reactions. Some are extremely interested in how we have accomplished this. They begin asking questions like how deep is the pond (20+ feet), what kind of structure have we put in it (piles of rocks), we talk about using the windmill for aeration and the sandy bottom in the beach area that provides habitat for perch to lay eggs. Other knowledgeable fishermen don’t believe us. “No Way!” is their reply when we say we have perch and walleye in the pond. It is their belief that ponds like our only support bass and blue gill.

After catching a 15″ walleye on two consecutive nights I decided I needed to start taking my camera with me while we were fishing. Since then all we have caught are perch. We have been catching perch as small as 2″

This photo is a close-up of the small fish in the next photo. It is a bit deceiving. 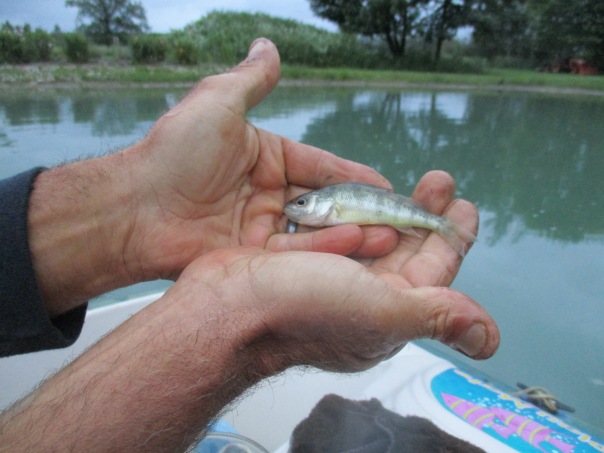 We have also caught perch as large as 9″.

While catching a large fish is always exciting, catching the small ones is confirmation that the perch are reproducing in the pond. We have yet to catch a small walleye, so it may be that the environment is suitable for walleye to live but does not meet their needs for reproducing.

Now I did say that we have only caught perch since I started taking my camera along, but like every good fisherman I do have the story of the one that got away. We were catching only small perch that evening, so it was a shock when the large fish hit my hook. It hit hard and fast (as walleye do) and I caught only a glimpse of the fish as it neared the surface attached to my line. My husband immediately realized my shock. “Don’t panic” he said as he reached to help me set my drag. Then, as quickly as the fish was on my line, the line snapped and it was gone. That’s my story; a true story. I am not asking you to swallow it hook, line and sinker because a monster walleye already did.