Yesterday morning I was enjoying my morning coffee on the deck when I noticed that an anonymous arachnidian artist had turned our deck railing into his/her art gallery. As the sun attempted to break through the fog the lighting made for lovely viewing of this artwork.

As I photographed the five webs woven between deck spindles the artist was nowhere to be seen. 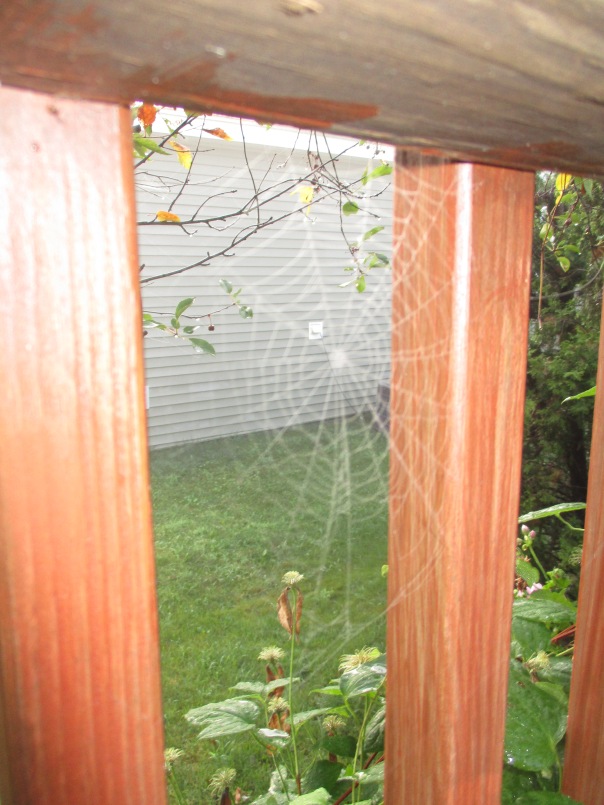 While I might view these as works of art, to their creators they are a means of survival – their “bread and butter” so to speak.

In the evening I decided to see if the webs had served their purpose. Were there any bugs caught in the webs? Would the “starving artist” eat tonight? I was surprised to see that only one web remained. Upon closer observation I noticed the artist, an “Itsy Bitsy” spider, not much bigger than a fruit fly, was moving in imperfect circles between two deck spindles. The evening lighting was such that the web was invisible, but I assumed that Itsy Bitsy was creating another web.

After searchng for answers as to what may have happened to the other four webs I realized that I may have been wrong on two accounts. According to this article  https://indianapublicmedia.org/amomentofscience/spiders-recycling/ spiders sometimes eat their own webs. Perhaps that is what I witnessed in the evening, and if so this is not likely a starving artist.

Did you know that spiders eat their webs?

27 thoughts on “A Starving Artist”