People who know me well and some who have been following my blog for a while could probably tell you that I believe that a plan is not complete unless it comes with a plan-b. I believe in having an alternative for everything from flushing the toilet when the water has been shut off, to what we will have for dinner, and who I would call if my car broke down. Going through life with plan-b’s has save me a lot of time, energy and STRESS.

My plan for Monday, December 23 was to begin baking desserts for our Christmas Day celebration, a couple of pumpkin pies and sugar cookies (that are a treat that I normally only make at Christmas time). We also had gifts that needed to be wrapped. Then On Tuesday I would bake the ham and dinner rolls leaving the oven available for roasting the turkey on Christmas morning.

Monday morning I set out the butter, that I would use to make sugar cookies, to soften and took two containers of pumpkin out of the freezer to thaw. This things should be ready for me to begin baking after lunch.

The weather was outside was unseasonably warm and sunny, a stark contrast to the cold and gray days that we had experienced throughout the month of November and into December. During that time I longed for sunshine, so when my husband called from the farm, as I was eating my lunch, and asked me if I wanted to come out I could not refuse. I could at least get out for a walk and to soak up some of that glorious sunshine that I have missed for so long.

There was still a thin layer of ice on the pond as the overnight temperatures have been below freezing. 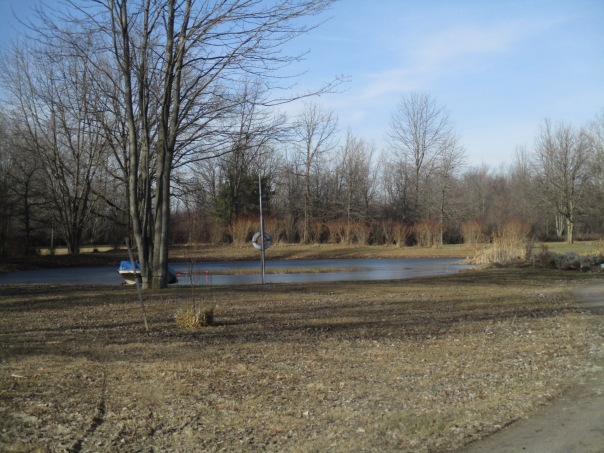 But it felt more like springtime than the second day of winter. 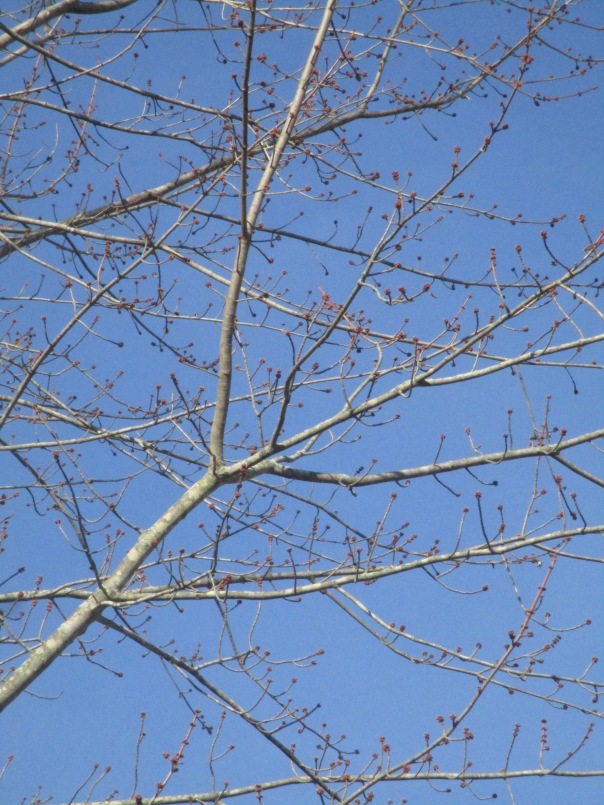 The maple trees seem to be confused by the weather. The buds are swelling as if wanting to open, and last week when my husband cut a low hanging branch from one of the trees the sap began to flow. We had no idea that they would produce sap this time of year.

The bees were out in full force. Sadly, and for reasons that remain a mystery, we have lost several hives over the past six weeks. We currently have three hives.

Since there was nothing in bloom for them to forage my husband set out some frames of honey for them to eat and a shallow pan of water with some stones in it so they could drink.

The chickens were also out and about, happily scratching and pecking.

After taking a walk around the back field with Trooper I just wasn’t ready to return home. My husband was going to work on cutting firewood, so I decided to help out by cutting kindling.

During the 3 hours we were working, and relishing the lovely weather, at the farm I was reformulating my plans for the day. Upon my return home I could still bake pumpkin pies and wrap presents, but making sugar cookies is very time consuming so I would find a simpler alternative. It was because I knew I had alternatives that I was able to enjoy the day.

Trooper enjoyed being at the farm with us and Peanut found it a fine day for a visit.

Once we returned home I began making pumpkin pie. It was around 3:30 and I should be able to get them in the oven and then throw together a quick dinner. As I opened up one of the containers of pumpkin that I had thawed I realized it wasn’t pumpkin – it was apple sauce. Oh No! I wasn’t making pumpkin pie today either. I went to the freezer and took out two containers that I was sure were pumpkin and told my husband I wouldn’t be baking pies until Tuesday (plan-b).

I then got out my Betty Crocker cookbook and found a recipe for toffee bars (plan-b). They had a cookie type crust with melted chocolate chips on top then sprinkled with chopped nuts. They took less than an hour to make and while they were baking I worked on wrapping gifts. My husband decided to have a pizza delivered for dinner (that was his plan-b), and I was most appreciative.

As I write the pumpkin pies are cooling on the counter the ham is baking, the rolls are rising while they await their turn in the oven and I should still have time to bake the birthday cake for Jesus.

In this case my alternative plans including making a change in menu that freed up some of my time and doing something at a different time than was planned, but truthfully if  one or even two of those desserts were missing I don’t think that anyone would notice. I could have just decided not to make so much.

As I close this post I am happy to tell you that that the ham, the rolls, and the cake have all been baked and I couldn’t be happier that I changed my plans.

From our hearts to yours we wish you love, peace and joy this holiday season and into the new year.