We were working at the farm in the morning, my husband planting tomatoes while I was weeding the prayer garden and marshmallow garden https://donteatitsoap.com/2015/08/05/marshmallow-root/ . We took about an hour for lunch and decided to get right back at it. As my husband walked toward the field where he was going to start planting pepper plants I heard him say, “We have a swarm”. 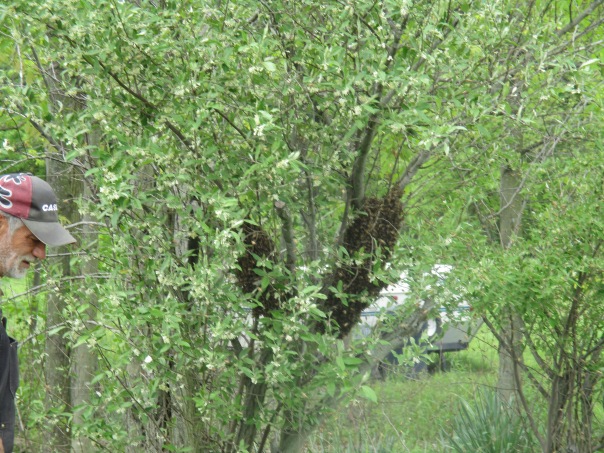 I grabbed my camera and walked in his direction. I saw the bees still getting themselves organized in an Autumn Olive tree. The way they were landing it looked like two separate swarms but by the time they had finished they had all come together as one large swarm. 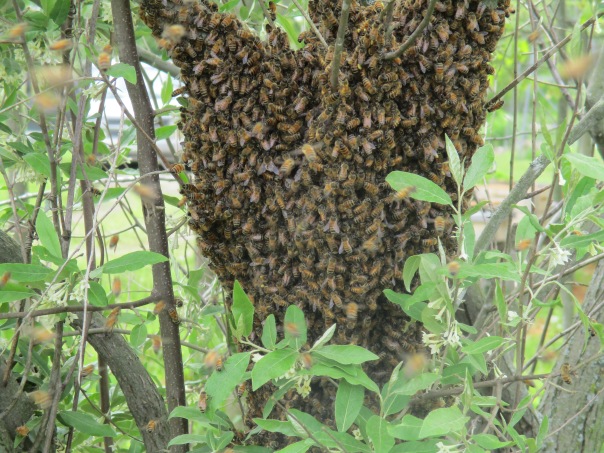 One of the nice things about the location of our apiary is that it is surrounded by trees so when it is time for a swarm of bees to move to a new location their first stop is usually in one of the nearby trees. The Autumn Olive which is in bloom right now is very fragrant and I don’t blame them for choosing this tree.

Swarming is how honey bees colonies reproduce. When the hive begins to become over crowded the bees produce a new queen. They do this by building special brood cells which are known as queen cells. The queen larvae is then fed exclusively on royal jelly. The old queen leaves the hive with the swarm of worker bees in search of a new location to call home. The new queen hatches, mates with the drones, and begins laying eggs in the hive.

One thing I want to point out is that if you come across a swarm of bees on a tree or other structure there is no need to panic. It is not necessary to have someone remove them, as these bees are in transition and will be gone soon. There is no danger if you simply avoid the area. That’s not to say that if you know a beekeeper you shouldn’t call them to see if they want to come get it, as they might appreciate the opportunity to start a new hive.

As the bees settled in my husband began preparing to capture them. Just like with hiving bees it is important to make sure that everything is in place before getting started. He already had a empty hive ready in anticipation of capturing a swarm. He opened it up and removed some frames from an area where he would dump the bees. He left the covers sitting nearby.

He got out a five gallon bucket with a lid and examined the tree. I reminded him this tree has thorns. He decided he would need to cut a lower branch off so he could get to the swarm. He put on his bee suit, but since he wouldn’t need my help I didn’t suit up. I would just watch and take photos. 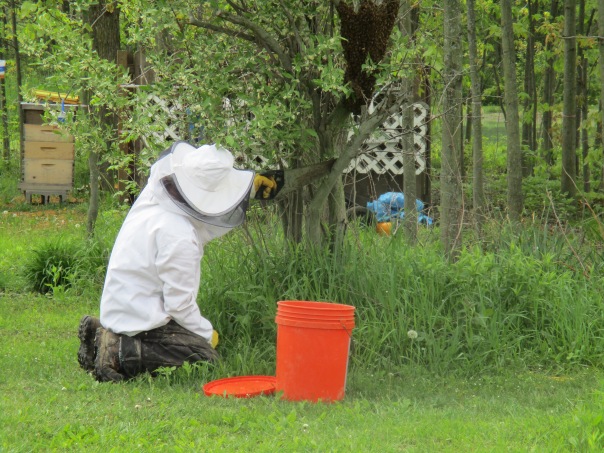 The battery of my camera went dead after this photo.

After he removed the branch he was able to put the bucket directly under the branch that held the swarm. He then shook the branch very hard and a large portion of the swarm dropped into the bucket. His objective at this point was to get the queen. He quickly covered the bucket and took it to the hive that he had ready.  He emptied the bucket into the hive and I imagine he said a silent prayer that the queen was amongst them. He placed the cover over the hive and went back for more of the bees who were gathering back on the limb. He again shook the branch so that another large amount of bees fell into the bucket, and he took them to the hive as well. After repeating this a third time he had captured most of the bees. When he placed the cover on the hive many of the bees which were flying around the outside began clustering on the hive. This was a good sign that the queen was inside.

It is now three days later and this hive seems to be functioning as well as the others. Worker bees are leaving the hive and coming back with bright yellow pollen. That is just what we like to see. 🙂