It doesn’t seem like a whole year has gone by since we last tapped maple trees and made our maple syrup. Maybe that’s because it hasn’t really been a whole year. While I didn’t remember the exact date that we tapped trees last year I was able to review the post I wrote about it, and I discovered that last year we tapped the trees on February 13th. Last year’s sap flow was considered early and we read that some syrup producers actually missed the season because the were not expecting the season to come so soon.

It was only January 20th according to the calendar but nature doesn’t necessarily go by the calendar. Despite the brutal cold we have had this winter we had been watching the forecast and preparing for the sap season to start. This is only our third year making syrup, so we don’t have much experience to go by, but since temperatures were forecast to be in the high 30’s and low 40’s Fahrenheit (between 3 and 7 degrees Celsius) 7 out of the next 10 days we thought this might be the right time. My husband thought that it would be a good idea to do a few test taps to see if the sap was flowing. So we took supplies for four taps to the farm.

The day was very reminiscent of the day we tapped last year. The sun was shining, there was still a thin layer of snow on the ground, and the pond was mostly still frozen.

The chickens were happy to be out scratching , pecking and even dusting themselves. 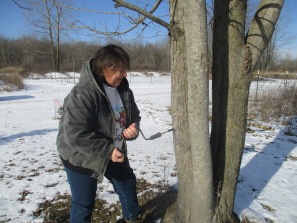 My husband and I worked together, taking turns drilling the holes and setting the taps.

When the sap began running within seconds of being tapped we knew we were on the right track. After setting the first four, we went home, gathered the supplies and returned to set the remaining 13.

A couple days after tapping the trees the high temperatures again stayed below freezing so no sap was flowing. Then we had a couple more day where temperatures reached into the 40’s F so the sap began to flow again. By Friday my husband determined that he had collected enough sap to make syrup. We would cook it Saturday.

My husband had the cooking station set up in the driveway. Because cooking sap produces so much steam cooking it the house would be a horrible mistake, and we are not equipped with a sugar shack so we do it much the way we imagine our ancestors  would have – outdoors over a wood fire. 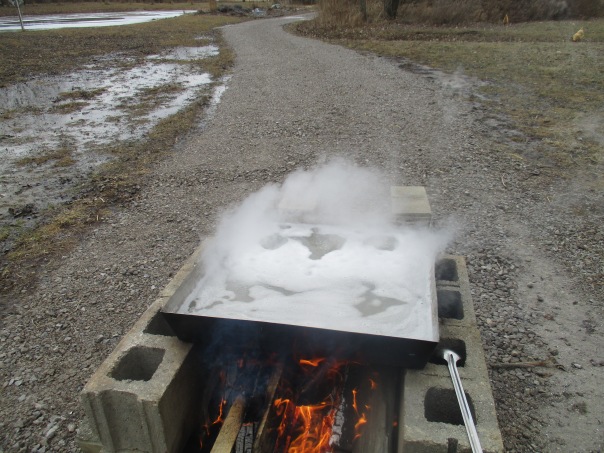 He spaces the concrete blocks so that the shallow stainless steel pan sits on the edges of the blocks. We build the fire within the blocks and continually feed wood into it from the open side.

We used a mixture of hardwood limbs and logs that we had cut on the farm and some scrap lumber my husband had picked up from the local sawmill. We began cooking the sap around 11:30 A.M. and by 4:30 P.M. we had reduced the estimated 23 gallons of sap  to the point that we could finish it on our kitchen stove.

Before cooking it on the stove we poured it through a sieve to remove some of the ash that was floating in it. I then brought it back to a boil and continued cooking it until it reached 7 degrees above the boiling point on the candy thermometer 219 degrees F.

Filtering the sugar sand out of the syrup is something that we have struggled with the past two years, so I decided to pay close attention to the temperatures while doing this. I let the syrup cool to between 180 and 190 F. For a filter I used one layer cheese cloth with one layer of felt placed on top of it. I placed the two layers together in my canning funnel then poured the syrup through the fabric lined funnel directly into the jar.

After pouring each jar I needed to change the filter, so I put the pan of syrup back on the stove over a low flame so I could maintain the proper temperature. The syrup flowed easily through the filters. I sealed each jar as soon as it was poured. We ended up with just a very small amount of sugar sand in the bottom of the jars. There is no harm in eating sugar sand as it is said to be made up of calcium salts and malic acid, so filtering out this sand is purely for aesthetic reasons (it does look like muck in the bottom of the jar). 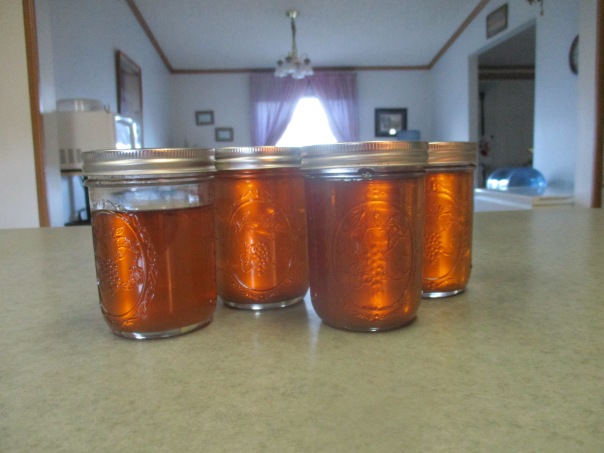 Even though once sealed the syrup should not spoil, I like to bottle the syrup in wide mouth mason jars, because as long as I leave the proper amount of head space the syrup can be stored in the freezer.  We ended up with nearly four pints of beautiful, sweet maple syrup.

What the rest of the maple syrup season will bring is anyone’s guess. Our weather forecast for the next 10 days shows daytime temperatures below freezing for all but one day, so we are not expecting the sap to run again for a while. When the temperatures do warm again, if the trees bud out quickly the sap will turn milky and is not good for making syrup, so we are grateful that we tapped the trees early and at least have some syrup this year.

I also made an interesting observation as I looked back at my post from last year, “The Sap is Flowing and the Hens are Laying”.   Again this year, as we tapped the maple trees we noticed that the hens have began laying more eggs. For five or six weeks we were getting an average of four eggs a day, this was enough to keep us in fresh eggs through the winter. On January 20, the day we tapped trees, we collected six eggs, then over the next week the amount increased so that we have collected 12 eggs each of the last two days. I honestly expected that the increase in egg production was more related to the number of hours of daylight and similarly to last year would occur in the middle of February. Perhaps it is more about the warmer temperatures we have been enjoying, I’m really not sure, but I do think I will attempt to track these two events in future years to see if they continue to coincide.

Until next time be well. 🙂