Giving the flower bed by our deck a makeover this spring is the perfect example of how “one man’s trash is another man’s treasure.” This flower bed was in desperate need of a makeover this year as it had become overrun with grass and various wild plants that I didn’t want there, so technically we can call them weeds. In addition some of the plants that I had planted there a few years back had grown too big for the limited space so it was time for them to go.

I had mentioned in a previous post that my husband was working a seasonal job at a greenhouse that is a large wholesale supplier of annual flowers. While working this job he saw value in many of the items that were ending up in the dumpster and headed for the landfill. He started bringing home some of the items that he thought we or others could use.

To makeover our flower bed we started by laying down a layer of thick black plastic as a weed barrier. The large plastic sheets we used had originally held 2000 lb. bales of potting soil. Once the potting soil is removed from the package the plastic is normally thrown away. Instead my husband brought them home and cut them into strips that we can use as weed barrier where needed.

After we put down the plastic we put a layer of wood mulch on top. The mulch was obtained from a local tree cutting company. In their yard they have piles of mulch that they give away.  My husband went there with several large lawn and leaf bags. He filled them with mulch and brought them home to use for this project.

I had decided that after we had the wood mulch down I would use flowers in pots to add color. We had many pots already stored in our shed and my husband had brought some home that were going to be thrown away. The weather was still too cool for most annual flowers to be comfortable and flourish, but the Pansies that my husband had brought home because they were unsellable would do just fine in the cool Spring temperatures. Though beautiful flowers these pansies were not sellable because the flats were not full, so unless someone came along to take them home they too would have ended up in the dumpster.

It was a few weeks later when my husband came home with the lovely pink Geranium hanging baskets. Though I think they are beautiful, they apparently did not meet the quality standards of the company he works for. While it seems a shame that they would have otherwise been discarded, I respect that this company has high standards and is only willing to sell top quality products. Out of the nine geraniums he brought home we gave two to our neighbors across the street who hung them one shepherds hooks in front of their home and two to our neighbors next door who did the same. We kept the remaining five and I found some brackets that we had stored in our shed and hung some from both the upper and lower railings of the deck. I love that this adds more dimension to this landscape. I also love how the neighbors displays of the same flowers seems to tie our community together.

Then one day my husband came home with three football shaped planters containing large red Petunias and blue Lobelia. The Petunias are so large that the Lobelia is barley visible. He said that they were sitting by the dumpster and he couldn’t stand to see them being thrown away. He gave them a good watering before setting them strategically in this flower bed.

I have never used flower pots in my flower beds before, but potted plants are a great, low maintenance way to beautify an area. I am so happy with the way this turned out. 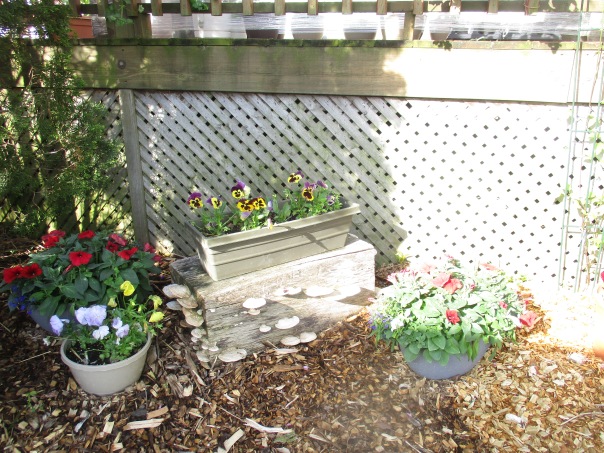 The other piece that I truly love is this old oak block that has been sitting in our back yard for several years. I think it’s original purpose was to be used as a log splitting block when my husband was splitting fire wood with a maul. We have since started using our hydraulic log splitter so the oak block has sat in the back yard unused. It began growing shelf mushrooms and earlier this Spring I noticed it’s uniqueness. I thought it was lovely and I needed to incorporate it in our landscape somewhere. I was a bit hesitant to ask my husband because it is a very heavy piece of wood, but as soon as I mentioned it he helped me load it into a wheelbarrow then he placed it in it’s new home, asking me exactly where I wanted it and how I wanted it oriented.♥  It worked perfectly into this design.

While this had the potential to be quite costly project the total cost for materials for this project was $0. We also feel good that we saved many of these items from ending up in the landfill.

Have you ever found treasure in someone else’s trash?