It’s hard to believe that autumn is here. I just wanted to hold on to summer – perhaps indefinitely. Since it is humanly impossible to stop time, the best I can do is hold onto and treasure the memories that Summer 2019 gifted me.  I have decided to place some of these precious memories in this post where, like keepsakes in a trinket box, they will be safely stored and I can return to them whenever I like.  I will also share them with you.

In early August I used my hours at the farm for picking blueberries, watering plants, and mostly weeding the prayer garden (this is the time of year that weeds really start to take over if they are not kept in check). 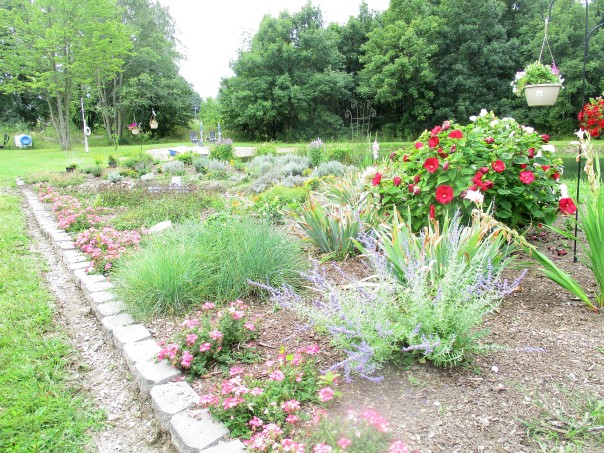 I had mentioned in one of my earlier posts that the prayer garden was in full bloom. My husband said he wanted to correct that statement but didn’t. He is right of course – by design the prayer garden is in continuous bloom, from early spring, when the daffodils appear, until late fall, or at least until we get the first frost of the season there is always something blossoming.

By mid August my chore list had changed. We had some decent rain so we didn’t have to do much watering. We began picking tomatoes and peppers and I began cleaning our 2019 garlic crop. 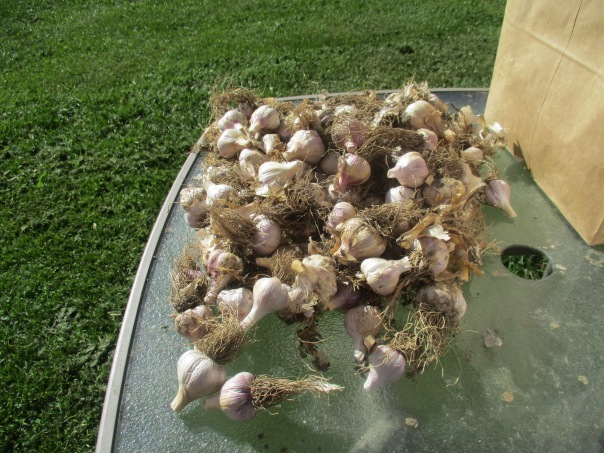 For the past four weeks or so the focus has been on harvesting our garden and either cooking and eating or preserving the harvest. While most of the tomatoes have been frozen so far, I did manage to get 15 quarts of tomato sauce canned. We have been enjoying fresh red skin potatoes (boiled or made into potato salad), Swiss chard (sautéed with garlic, cooked into an omelet or added to a cream cheese stuffed chicken breast), baked butter nut squash, tomatoes (fresh on the side, on a sandwich, or cooked into homemade pasta sauce) and stuffed green peppers. I also cut up three small cabbages and started the process of turning them into sauerkraut. This is the time of year that all of the work pays off. 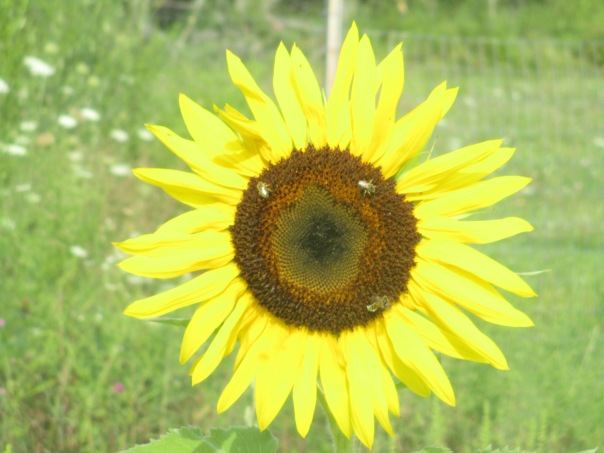 We have eight healthy hives right now and our son-in-laws hive is thriving as well.

We have harvested honey three times this summer from three different hives. Each harvest yielded approximately 30 lbs. of honey. After we harvest the honey and wax from the frames my husband sets the frames back out for the bees to finish cleaning them up. The picture above shows the bees completing this task.

A few weeks ago one of the hives swarmed. My husband captured the swarm and put it in an empty hive. He then placed a feeder with honey in it on top. The next day the bees had left that hive. We are not sure why they weren’t happy there but they did fill up on the honey before leaving.

The eight Jersey Giants that were cute little chicks this spring are now full grown hens. They began laying in eggs in August and will hopefully keep us in fresh eggs through the winter months.

Normally I don’t make a lot of soap during the summer months but I found I was out of a few varieties. I decided to have some fun with it.

My sister had given me some silicone mini molds so I made a few small bars using them. I can see making holiday themed sample soaps or using teddy bears or duckies as favors for a baby shower. They would however need to be clearly labeled  “Don’t Eat It!” as I would want someone thinking they were white chocolate.

I have also been practicing using my soap stamp and getting better at it. It’s really a matter of stamping the soap when it is still just a little soft.

In early August we planned a family picnic at the farm. Not all of the girls could make it but Tina and Ken brought our grandkids and Kara also came out. After we ate, our three year old grandson, Jackson, went fishing with his dad and grandpa and caught his first fish. I didn’t get any pictures of this because Tina and Kara and I had taken (granddaughter) Addy to pick blueberries.

In August my husband and I went plant shopping. Normally I don’t like shopping. The exceptions are going to a greenhouse or nursey and shopping for yarn or other craft supplies. Each spring we usually go to a local green house and pick up a least a few plants for the year but it’s quite easy for me to get carried away and buy way more plants than I need.

You may remember from this post that my husband was working at a greenhouse this spring and was able to bring home many plants that would have otherwise ended up in the dumpster. With all the free flowers we had there was no need to go plant shopping…until August. While working the landscaping job that he started in July my husband had to make a trip to a nursery where they purchased anise hyssop plants that would be planted at one of the jobsites. “They had pretty purple flowers and the bees were all over them,” he said as he told me about the plants. I knew this herb had some medicinal  properties and if the bees like it then we should definitely plants some.

I did a little homework and found that anise hyssop is generally a plant the deer avoid because of it’s strong fragrance. This sounded like the perfect addition to our prayer garden.

We purchased two large plants that were in full bloom and two smaller (less expensive) plants that should continue to grow each year until they are about a foot wide. I understand that these plants also drop seeds each year that will readily sprout into new plants. These plants are still blooming more than a month after we planted them and I saw bees foraging in them yesterday. 🙂

As we were walking through the green house I noticed a table full of flowers that I was not familiar with. They had bright orange and yellow flowers. They were marked $5 each. After asking an employee if the deer would eat them and being assured that it was not likely, I picked out two yellow and one orange. (There I go getting carried away.) The plant is called lantana. It wasn’t until we got them home that we realized that they are an annual so will not be coming back next year. 😦

We took a Sunday off in August to visit the Armada Fair and watch the tractor pulls.

My husband and I wore our matching tractor pull t-shirts so my daughter snapped a photo of us. We were joined by daughters Kara and Lindell and Lindell’s boyfriend Brysen.  We arrived early enough to walk through the animal barns and view the exhibits before the tractor pulls began. I’m not sure which is cuter baby goats or baby cows. I love seeing them both.

We also filled up on lots of expensive fair food. I wonder which was higher the calorie count or the price.

For those of you who, like Brysen, have never seen a tractor pull, let me sum it up. Basically tractor pulling is a competition to see who’s tractor can pull a weighted sled the farthest. If you would like a little more information see this article.

This tractor, named Cruel Intentions, is owned by the Capozzo family. They also own and operate the excavating company that dug our pond. This is the tractor we were rooting for that day and they did take first place in their class.

After the tractors were finished they brought in a couple of semi’s that did an exhibition pull.

In the photo below I was trying to get a shot of the score board that electronically records each tractor’s speed and the distance they pull but my aim was a little high.

After viewing this photo I did spot something I hadn’t noticed before. The street signs to the right of the score board mark the intersection that leads to the adult beverage tent. If you can’t make out the signs they say “Good RD” and ” Beers LN”. That made me chuckle.

The beverage tent was the other place we visited at the fair and while I mostly stuck with non alcoholic beverages that day I did end up drinking a glass of hard cider when Lindell ended up with an extra one.

Even though autumn has arrived, and the temperatures have been slowly cooling, we are forecast to have at least one more of summer-like day today and I will happily take all that we can get.

Have you ever seen tractor pulls?

What is your favorite memory of this summer?

27 thoughts on “Wrapping Up Summer”