Since Halloween falls mid-week this year we decided to celebrate early. Saturday we held our second (annual) Halloween party at the farm. Some readers might remember last year we ended up holding the party in our barn as the weather was not conducive to an outdoor party.

This year although we planned and were ready for outdoor activities we again had the barn ready as a back-up plan. The weather is just too unpredictable. Guests were instructed that costumes were optional, but they should dress for the weather (which should always be the case when you visit our farm).

By Saturday morning we were certain that rain would be coming later that day. Our party was to start at 2:00 P.M. and we were hoping to get some outdoor activities in before the rain came. 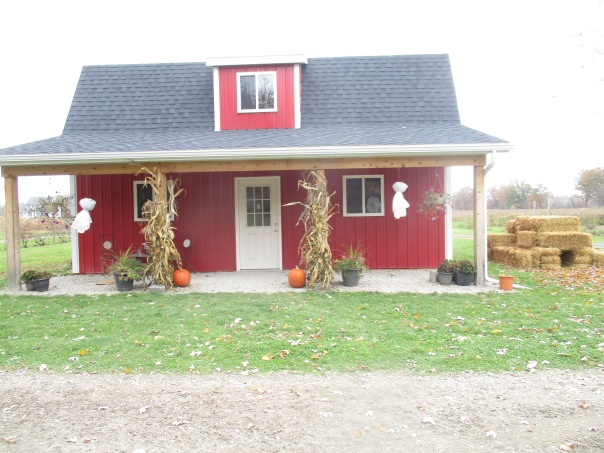 We spent very little money on decorations. We mostly used materials we had on hand. A few things, like this skeleton (below), we picked up at the dollar store. Looks like he’s been waiting to use the porta potty for a long time. LOL!

After my husband and I put the finishing touches on our Trick-or-Treat Trail I took some photos so I could take you all on the walk with me. Don’t worry. The trail was designed to be fun for children so there is no blood and gore, no Freddie Krueger, and no one chasing us with chainsaws.

At the entrance of the trail was a graveyard. 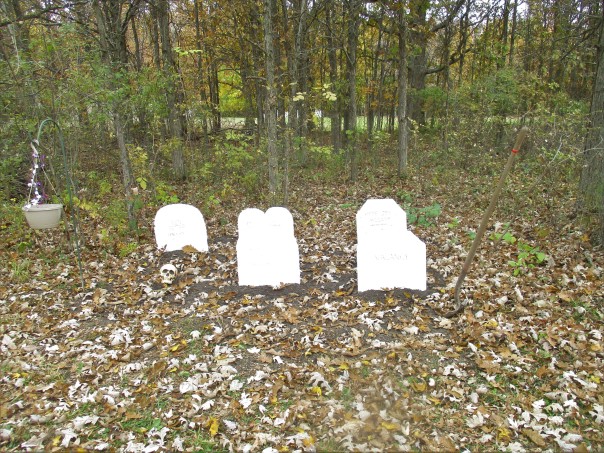 It was also the first trick-or-treat station. The hanging basket to the left is where the kids could pick a few pieces of candy from the basket (even the big kids got some). The headstones were made out of Styrofoam sheets my husband had collected at the greenhouse job he worked this spring. They were some type of packaging material and were dumpster bound had he not brought them home thinking we might have a use for them. 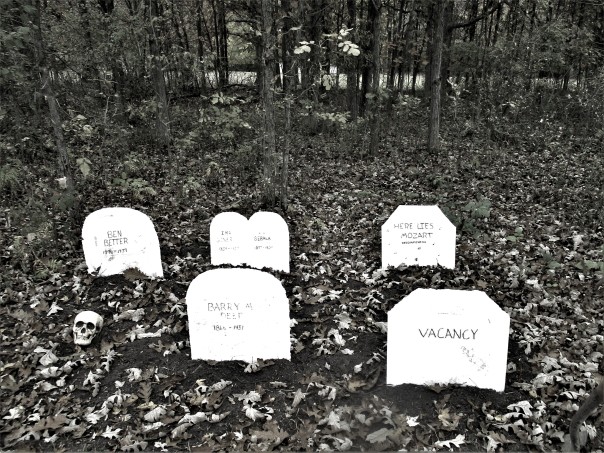 I had to edit the photo in order to see the writing and some are still not clear enough to make out the words. Buried in this graveyard (starting in the back row left side) are Ben Better, the double headstone is Ima Gonner and L.L.Beback, the third one in the back row reads Here Lies Mozart, Decomposing. In the front row it appears that Ben was not buried very deep as a skull has emerged from the ground. The headstone to the right is Barry M. Deep and as you can see the last grave is vacant (notice the shovel waiting by the grave). LOL!

While the kids might have been too young to pay attention to the headstones I think the adults who accompanied them enjoyed the humor. This candy basket contained reeses peanut butter cups, Hershey’s chocolate bars, kit kats and almond joys. If you have a favorite help yourself. 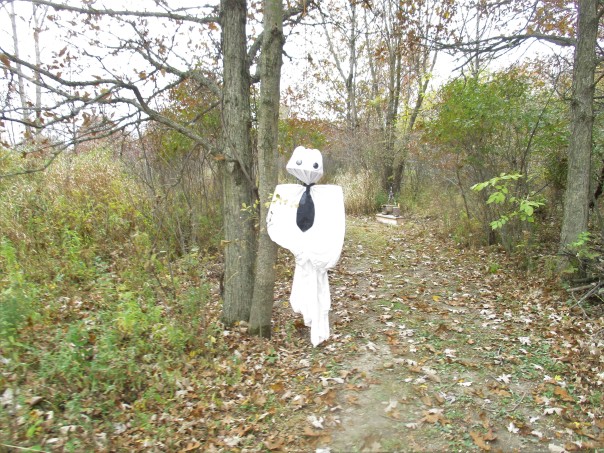 Just beyond the graveyard this guy was hanging out. He seemed to be the gatekeeper (minus the gate). Although he is by no means frightening, when we first hung him up, several night before the party, he looked pretty creepy from a distance, and several times in the days that followed I would be working in various areas around the farm a catch a glimpse of what seemed to be someone standing there, again very creepy. LOL! 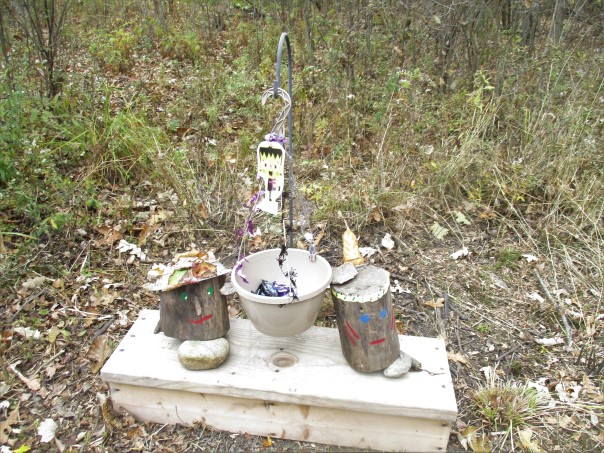 A little farther down the trail is our next treat station. I had discovered these two logs laying in the woods and decided to give them some personalities (faces). This basket contained peppermint patties. They seemed to be a favorite of the adults.

As we come to the fork in the road we will veer to the right to find our next trick-or-treat station. This time it is both a trick and a treat. 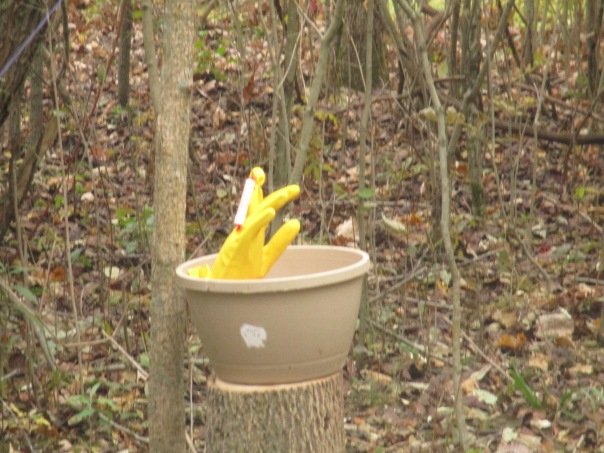 My husband designed this basket with the glove secured in it and a fishing line attached to it. The fishing line was then run through a pulley that was attached to the tree behind it. He tied a small handle on the line and then ran the line to a stake that was placed along the path. When he pulled on the handle the glove (hand) would rise up out of the basket of candy. Very clever! This basket contained Smarties.

We continue to follow the winding path through the woods.

Our next trick and treat station is just ahead. This “haunted” rocking chair held a basket of ghost lollipops made from tootsie pops. The chair was also rigged with a fishing line/pulley system that allowed us to make the chair appear to be rocking on it’s own (or was it the ghosts?). 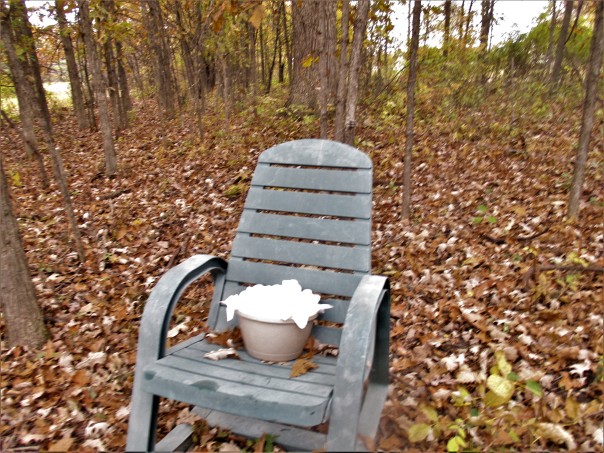 Another treat basket hung from a shepherds hook as we were exiting the woods. This one also held reeses, Hershey bars, kit kats and almond joys.

Upon exiting the woods we turn to the right and head north along our west property line. Another treat station lies ahead under an oak tree that appears to be inhabited by bats. 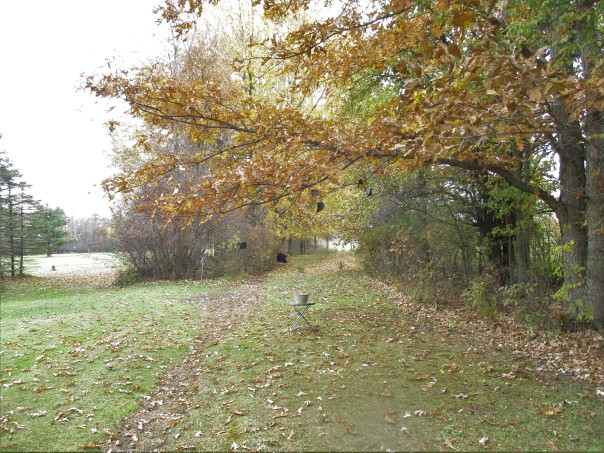 This basket contains white chocolate kit kat bars. As we venture up the slight hill and circle to the right we find our last trick-or-treat station. 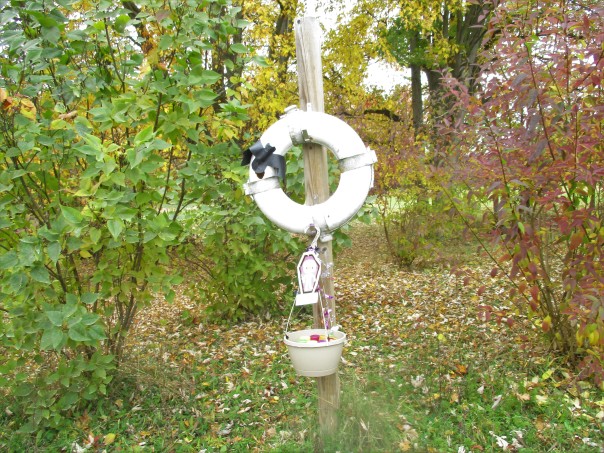 The mummy hanging on this basket is giving out cans of silly string. When the kids took their can of silly string from the basket they were instructed that they could not use the silly string inside the barn. While I didn’t see any adults take a can some how some of them ended up with it. Hmm, I wonder how that happened. 😉

From this point we could now head back to the barn area where most of the other activities took place, but first I thought maybe you would like to see how the kids enjoyed their trick-or-treat trail.

Our Granddaughter, Addy, picking some candy out of the basket.

Our Grandson, Jackson, was fascinated with the hand rising out of the basket. He was more interested in how it worked than getting the candy. He did high-five the hand when I suggested it to him. 🙂

Before approaching the haunted chair our 5 year old, great nephew, Landon turned and informed us “I’m not falling for your tricks.” LOL!

My biggest surprise was how much the kids enjoyed the bats, reaching or jumping up to touch them or giving them a smack to see them fly. They spent a little bit of time playing with the bats before finishing their walk through the trick-or-treat trail.

After trick-or-treating  it was time to play on/in the straw bales. 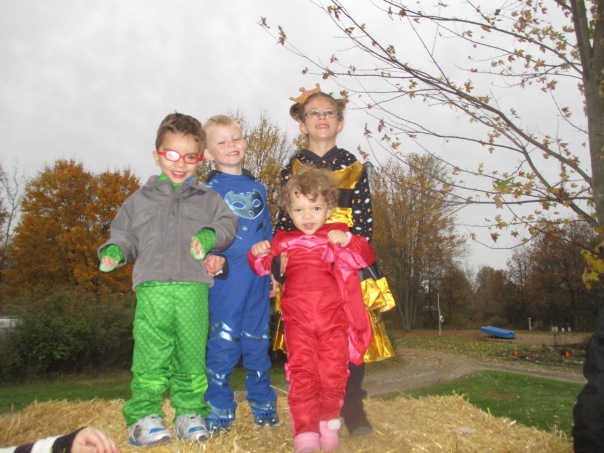 The rain held off for at least another hour while the kids played on the straw bales and silly string wars took place.

No one was exempt from getting “stringed”, so grandmas and grandpas and aunts and uncles, some armed with a can and some not, joined in the fun.

Just before the rains came my husband and son-in-law moved the straw bales to the barn porch. The straw stayed dry as did the kids as they continued to play.

The kids all looked so cute decked out in their costumes. Don’t feel bad if you don’t recognize their characters because I didn’t. I had to get the scoop from those in the know (their parents). I’ll clue you in – Landon, Jackson and Addy are characters from a cartoon called PJ Masks where three children become superheroes at night. Landon is Catboy, Jackson is Gekko, and Addy is Owlette. Kenzie is wearing a Queen Bee costume (appropriate for a visit to the farm). Queen Bee is part of a collection of doll called L.O.L. dolls.

You may remember Peanut, the cat, from the day we harvested garlic, well peanut has become a regular visitor, showing up at the farm almost daily. I had concerns about peanut being at the party because I thought he might jump on the food table.

It seems that my fears were unwarranted as once the guests arrived Peanut found many a welcoming lap to sit on. Several times I spotted Addy giving Peanut kisses. It was so precious.

While all of our guests followed our instructions to dress for the weather a few came in costume as well. Jinkies! That’s Shaggy, Velma and Scooby Doo in the lower righthand photo.

In case your wondering what was on the menu we decided to keep it simple. We bought fried chicken from our local Meijer deli and I have to it admit not only did that make it easy it was also good and priced right. I made a pasta salad, we had a veggie tray with dip and cheese tray with crackers and apple slices with caramel dip. For dessert Aunt Donna made monster cookies and I made rice crispy treats. I dare say no one should have went away hungry.

It was a great day filled with food, family, friends, and fun. We couldn’t ask for anything more.

Thanks for visiting. Did you get some of your favorite candy? Would you have showed up in costume? If so who/what would you come as?