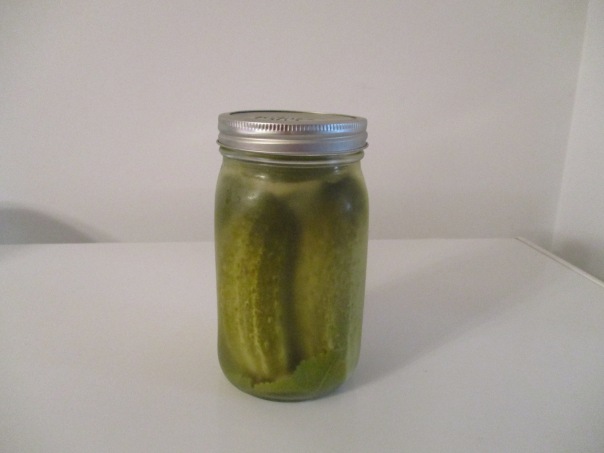 In the past my attempts to make dill pickles by canning, using vinegar recipes, have resulted in pickles with that have a decent flavor but are too mushy to really enjoy. I really haven’t even attempted to make pickles in a several years because we have had horrible cucumber crops. We had pretty much decided not to grow cucumbers as it seemed that no sooner would the cucumber start growing well then the cucumber beetles would arrive, the cucumber plants would then begin turning brown, apparently from bacterial wilt, and dying before we could harvest more that a couple of cukes.

When starting plants this spring my husband came across a packet of pickling cucumber seeds and decided to give it one more try. We aren’t really sure what has made the difference this year but the cucumber plants are flourishing. It could be that this variety of cucumbers is disease resistance, or that the cucumbers were planted later and the cucumber beetles missed out, or possibly a combination of the two. No matter the reason, we are grateful for the productive crop.

It was about three weeks ago when my husband brought me a bag with more than a half dozen nice size cukes from our garden. With more cucumbers than we would eat in a couple of days I knew I needed to make pickles. There were not enough to can a batch of the vinegar pickles, and as I said I was never happy with my past results, so I decided to try fermented pickles.  I use this recipe. http://www.culturesforhealth.com/learn/recipe/lacto-fermentation-recipes/lacto-fermented-kosher-dill-pickles/  I didn’t have enough to warrant the use of my 2 gallon crock so I decided to use a 1/2 gallon canning jar. I picked a horseradish leaf to use to add tannins, my husband picked me some dill and I peeled a couple bulbs of garlic to add. I didn’t add any other spices because in my opinion garlic and dill is all that is needed to make a great pickle.

Since I didn’t have a fermenting weight that would fit inside a jar to hold the vegetables down under the brine, I read about using a smaller jar to nest inside the wide mouth jar and decided that would work. It would have worked perfectly well except I discovered that all of my smaller canning jars were in use. I needed to improvise.  I used an ice tea glass and although it sat quite above the rim of the canning jar, it was heavy enough to hold the pickles under the brine. I then covered the jar, glass and all, with a dish towel.

I left them on the kitchen counter where I could keep an eye on things. By the next day I could see bubbles in the liquid and on the following day the liquid began turning cloudy. This is what should be happening. I wasn’t sure when they would be done, but since the temperature in my kitchen these days is higher then the recommended 60-70 degrees Fahrenheit, I decided that two more days on the counter was enough. My goal was nice crispy pickles. I removed the towel and the glass, put a canning lid on the jar and put them in the refrigerator.  Meanwhile I read a few more article about fermenting cucumbers and when my husband brought home another batch of cukes I immediately washed them, trimmed the flower end and put them in a bowl of ice water, until I was ready for them.

For the second batch I used the same recipe and the same process except I didn’t have any more 1/2 gallon jars so they were split between two wide mouth quart jars. The second batch was basically the same as the first – they began bubbling on day two, turned cloudy on day three and on day five I refrigerated them. 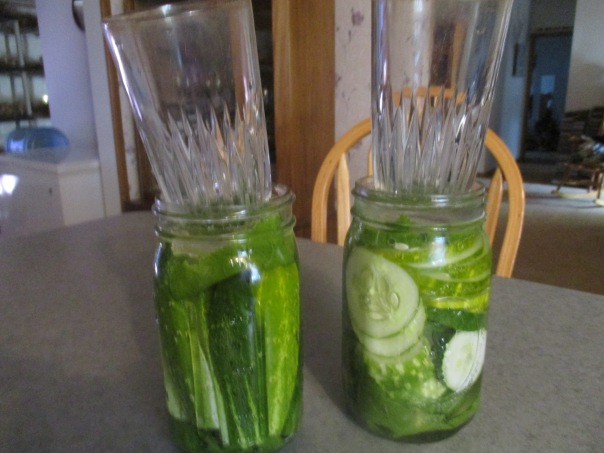 The third batch of cucumbers that my husband brought home had gotten quite large so I decided to experiment with cucumber spears and slices. I used the same recipe and the same method. At this point they are cloudy and bubbling on my kitchen counter. I will refrigerate them tomorrow.

As for the taste test, last weekend we decided just to have cold turkey and swiss sandwiches for dinner and my husband decided that we had to have a pickle with our sandwich. I cut one in half and placed a half on each of our plates. I waited for him to try it first. “You nailed it!” he exclaimed after taking the first bite of his pickle. These pickle turned out just as I hoped, crisp with the garlic and dill flavor.