To clean the bees wax that we harvest with the honey from our hives I have seen and read about several methods. I first tried what I thought would be the easiest, which involved boiling the wax in water, allowing it to cool and then scraping all of the non-wax particles off the bottom of the hardened wax, it was exactly the way I would render lard or tallow. I was not happy with the results of this method for cleaning wax. I found that scraping the particles off the hardened wax was difficult, and it took several times repeating the whole process to get the wax as clean as I wanted it. The wax also lost it’s sweet bees wax fragrance.

I next decided to try one of the filtering method that I read about. I will start by saying that all of the pans and utensils that I use when working with wax are dedicated to working with wax. Once it is there the wax is extremely difficult if not impossible to wash off.

I always start by rinsing the wax. Today my husband did this for me. The wax was in a five gallon bucket that has small holes drilled in the bottom. He took it outside and ran water from the garden hose though it until it seemed like most of the honey was rinsed out. I then just let it drip for a while.

There are two important things I will point out about rinsing the wax. The first one is never rinse the wax in the house. Beeswax is a very hard substance, its melting point is about 147 degrees Fahrenheit. A drain clogged with beeswax could be a very expensive fix.  The second is that once the wax is rinsed and drained as much as possible, it should be cleaned or filtered right away. If it is not possible to filter it within a few hours, I freeze the wax. The reason for this is that the wet wax will grow mold. Unfortunately, I learned this the hard way last year and ended up throwing away quite a bit of wax. 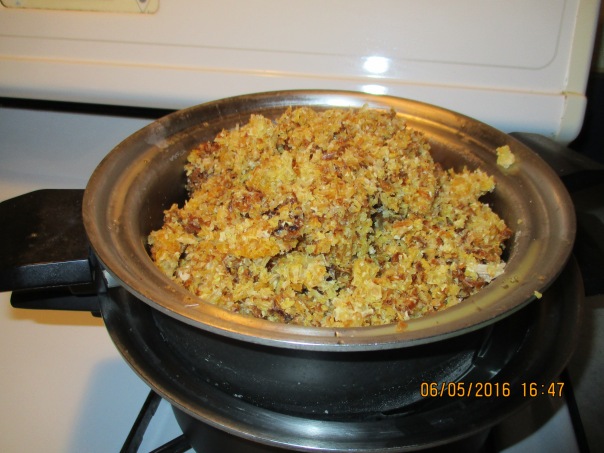 To melt the beeswax I use a double boiler or two old pans that stack together (again they are only used for this purpose). I put water in the bottom pan and the wax in the top pan. I heat the water and let it boil the water until the wax is melted.

When the wax is completely melted the non-wax particles can be filtered out. To do this I use a strainer lined with several layers of cheese cloth.

The strainer fits nicely into this old ceramic crockpot insert that I picked up cheaply at a Salvation Army thrift store. I pour the wax through the cheese cloth into the ceramic pot and then pour the filtered wax into some of my soap molds.

When it is taken out of the mold it looks like this. Some of the bars may still have some dark spots in the and will go through one more cycle of melt and filter.

While I always use news paper on the counter, when working with wax, I have learned that the finished bars should not be placed directly on the newspaper because the ink will transfer from the paper to the wax.

I have read that one pound of beeswax holds 22 pounds of honey. These numbers are very close to the amounts of honey that we harvested and the wax that I filtered. Most of this wax will be used to make my balms and some may be used to make candles.

Not to have any of this valuable wax go to waste, we have begun using the cheese cloth, that is now coated with a wax film, as fire starter in the fire place. It works wonderfully.