I mentioned in one of my recent posts that we had been working in the asparagus patch and it seems that we completed this work just in time for the season to begin. While walking through our asparagus patch on Monday I discovered the first two shoots poking up through the soil.

Last year our asparagus crop was a bust. It was April 23, 2019 when I posted on my blog that I had noticed the first shoots popping up. But the rainy cold spring that we had seemed to stunt our crop. I picked enough for two meals, but since we were seeing very few spears emerge we decided to let what did come up go to seed in hopes of producing stronger plants this year. It seemed like only about 20% of our plants were even producing through the month of May.

We didn’t really pay much attention to the patch for most of the summer but in early fall when I walked through it I realized that most ( 80-90%) of our plants had leafed out and gone to seed. We were quite surprised and truly grateful that so many plants had survived. Even though the amount of rainfall we had in the spring was record breaking we knew we needed to make some changes in the asparagus patch to try to prevent a repeat performance.

My husband started in the fall by removing the welded wire fence that enclosed the area, then after cutting the patch down he dug some trenches to allow for water run off. We monitored it through the winter since we had more rain than snow this year and the drainage trenches were working well.

We decided to just use plastic deer netting around the patch while the asparagus is in season to keep the deer from running through and nibbling on the spears. My husband pounded the metal posts in.

We also decided to burn off the dead plant debris and all of the weeds that had begun growing up. Hopefully this will have destroyed any asparagus beetle eggs that may have been left in the patch and eliminate them as a problem this year. 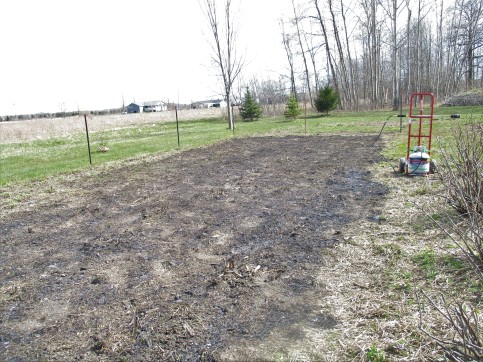 Here is a photo of the patch after I burned it off. 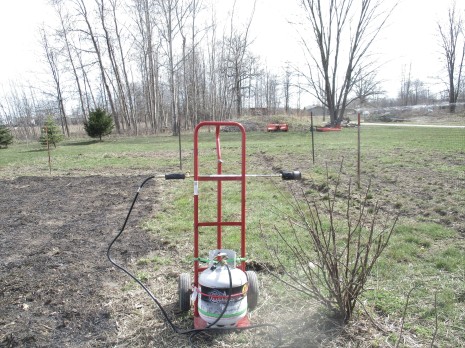 This is the flame thrower/torch that I used to burn of the weeds and debris.

My husband and I then worked together to put up the deer netting on Sunday. As I mentioned I saw the first two spears poking up from the ground and with over an inch of rain forecast over the next three days all we can do now is pray that we don’t see that repeat performance.

Have you been enjoying any outdoor activities?