The chicks, at four weeks old, were quickly out growing their stage two brooder so we began transitioning them to the chicken yard. 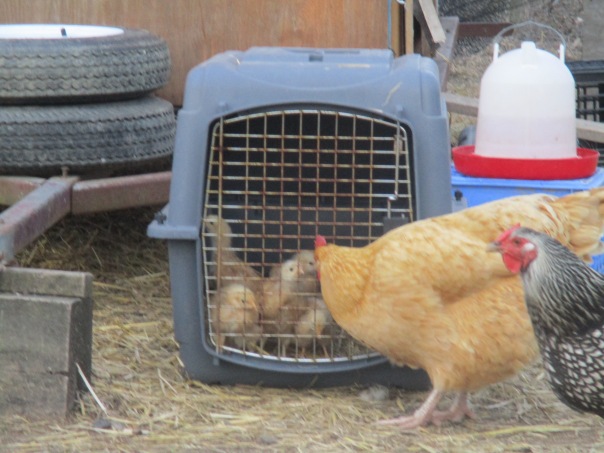 The gradual transition serves several purposes. It allows the older birds to get used to the young ones; it allows the chicks to become familiar with their new environment; and they have the warmth provided by the heat lamp in the stage two brooder while the nights are still cold.

We set up a temporary enclosure within the chicken yard, near the coop. We use 4 t-posts and about 30 feet of 2 foot tall chicken wire. We also place netting over the top to deter overhead predators. 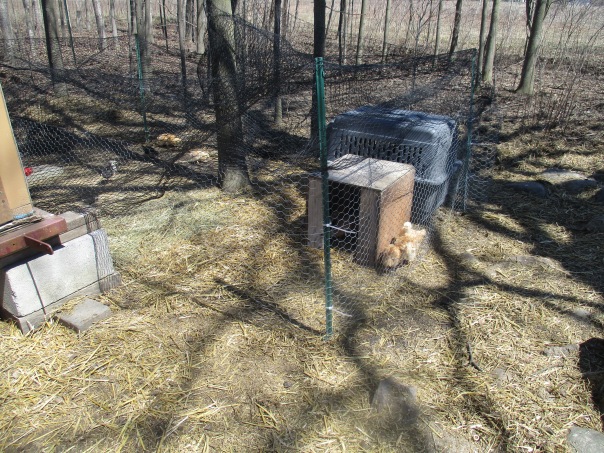 The spot offers both shade and sufficient sunshine, at least this time of year before the trees get their leaves. The wooden box provides shelter if they need it and the crate is used to transport the chicks to and fro.

Each day for about a week the chicks were taken out to this play yard to spend their day pecking and scratching and doing what chickens do, and each night they return to their stage two brooder.

After a few days we began letting them out of their enclosure when we were in the area. They love this freedom and it is so funny to watch them run at full (chick) speed with wings flapping or crane their neck and jump to catch a bug in mid air.

Last week, when the chicks were about 5 weeks old and nicely feathered out, they began spending their nights in the coop.  They have yet to find their way into the coop at night. Instead they find their way to the crate then we put them in the coop. We will begin training them to go in on their own soon.

We have left the outside enclosure up  for now and make sure the chicks are inside when we are not around. When we are there we allow them to free range, but they have yet to venture far outside the chicken yard. 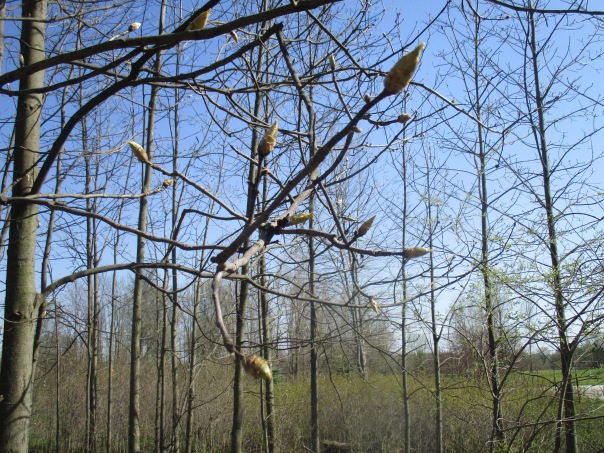 Once the buds on the hickory trees become leaves we will take down the enclosure because the leaves in the densely treed area will provide a canopy to help hide the chicks from the view of over head predators.

We really are enjoying raising this batch of Buff Orpington and Black Austrolorp chicks. They are very friendly and I would recommend these breeds for anyone considering raising chickens.

Chicken TV – has become a spring/summer past time for us. That’s what we call the time we spend sitting in our camp chairs near the chicken coop watching the chickens as they peck and scratch and do what chickens do. It’s usually the last half hour or so before the chickens go in for the night. It really can be quite entertaining especially when they are young.

Our Buff Orpingtons are the friendliest of the four breeds that we have and Honey one of our oldest hens will usually sit on my husbands lap. Last year some of buffs that we raised as chicks would also sit on our laps or climb on our shoulders while we sat and watched the group.

This year we have decided not to get attached to the buffs that we are raising since we intend to butcher them before long. We didn’t hold or pet them even when they were  adorable little balls of fluff.

Saturday evening my husband got out my chair and put it near the chicken coop. He then asked for my camera and told me to sit down. I sat in my chair and before long I had chickens on my lap. 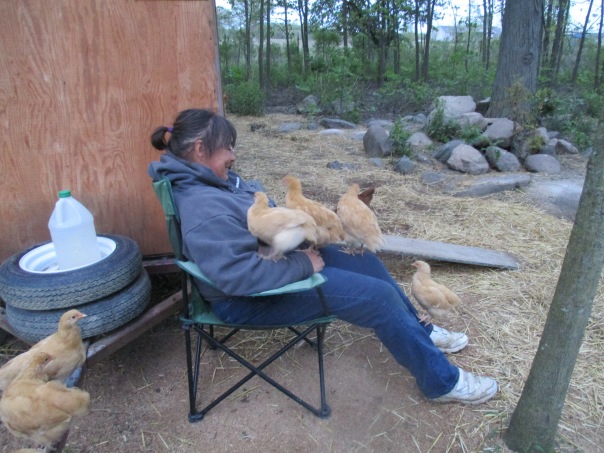 “Close your eyes,” my husband warned me, “they will peck your eyes.” 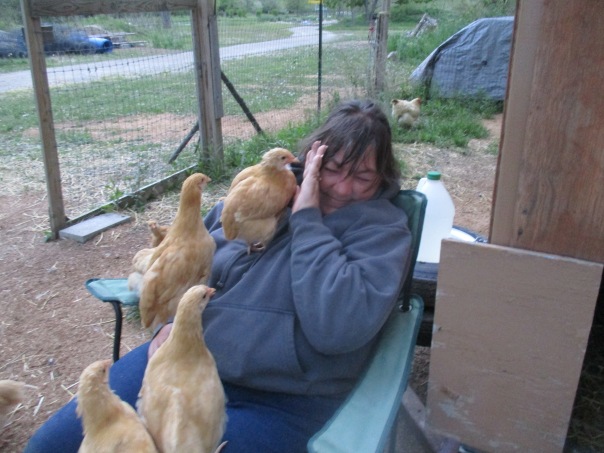 So while I sat there with my eyes closed, my husband snapped pictures and counted as each of the young buffs landed on me. 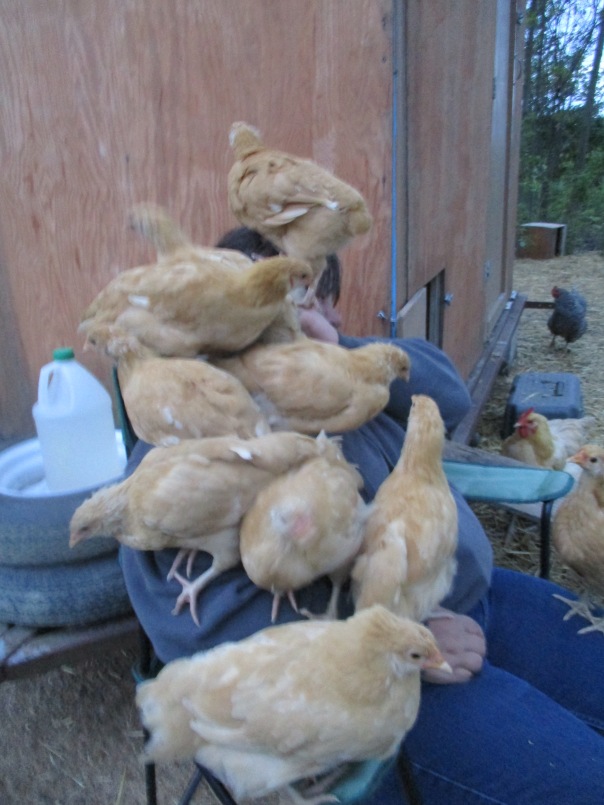 Within about two minutes I played roost to all 10 young buffs and had become the star of Chicken TV.

My husband knew this was going to happen because he had the same experience the night before when I was not with him.

I don’t mind one or two chickens sitting on me but this was way too much, so he helped me clear them off and the he went about teaching them to use the ramp to get into the coop.  They were just about there but one just couldn’t resist saying a special good night to him. 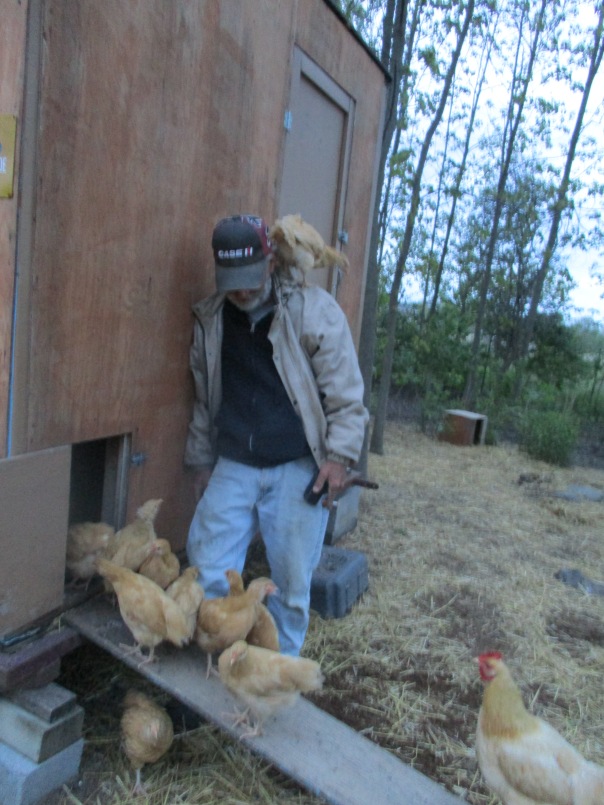 A few days ago, as we prepared to get chicks, my husband brought in the stock tank that we use as a brooder. When Scout saw this he began looking around for the chicks. We had to tell him “not yet, Scout”. We weren’t planning on getting the chicks until the following day. Scout has been down this road before, in fact 4 out of the past five years we have brought home baby chicks and raised them.

The first year I had great concerns about Scout being around the chicks. When we adopted him from the shelter in 2011 we were told he was about 3 years old and part terrier. Nobody knows what kind of terrier but that was not important to us. Over the next several years we found that he definitely had the terrier instinct to hunt and kill small animals and he was quite proficient at it. He could quickly and cleanly dispatch a raccoon, possum, ground hog, cat or baby turkey by just snapping it’s neck. He was about eight years old when we first started raising chickens.

I pretty much left it to my husband to train Scout with the chicks. Dom would hold a chick and let Scout sniff it and nudge it with his nose and he would tell Scout that those were his (Scout’s) babies. “You have to be nice to your babies,” we would say. Scout would become very excited, and want to look into the brooder, whenever he would hear the chicks make a noise, and anytime my husband or I were doing anything with the chicks (feeding, watering, holding or cleaning the brooder) Scout wanted to be involved.

That spring Scout learned that he was not allowed to chase and kill the chickens, unfortunately it was at the expense of one of our hens, but for a dog of his age and breed to learn not to chase chickens, or any other small critter, is a huge success.

Nowadays I have no concerns about Scout chasing the chickens. Our free range chickens wander, peck and scratch throughout the farm and we have total confidence that neither Scout nor our other dog, Trooper, will cause them any harm. 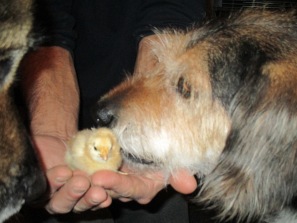 One of Scout’s nicknames is “Chicken Daddy”, and he loves it when we tell him he is a good  Chicken Daddy. At age 13 (in people years) Scout has slowed down a lot. He does not pay as much attention to the chicks, but he was still very eager to see/sniff them when we brought them home.

The other thing he really enjoys is helping close up the chicken coop at night. When we go into the coop to count chickens and make sure everyone made it back home, Scout will step inside and sniff a couple of chickens to say “good night to his babies”.

He really is a good chicken daddy.