In general I can’t say it was a great year for growing food. Some crops like squash failed to produce, and most, including strawberries, asparagus, tomatoes, corn and melons yielded only a fraction of what we expected.  Despite the late spring frost that killed off all of the newly unfurling leaves, our grapes were one of the exceptions. So I can say it was a grape year. 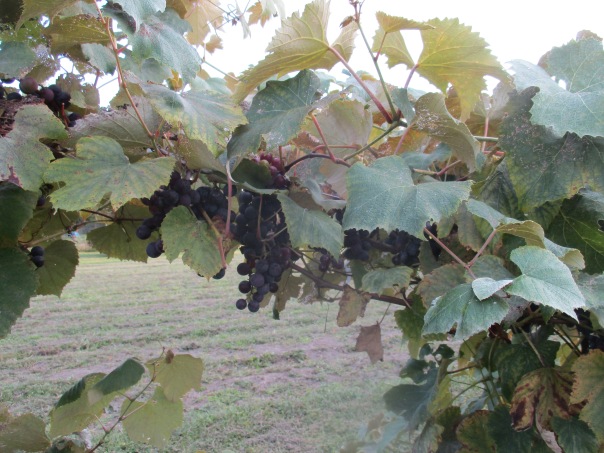 Our grape arbor was started in 2012. We put up the three posts and then transplanted some grape vines, that were growing in our back yard, in between the posts. We had purchased the hardware and the wire that we intended to use to support the vines, but with so many projects on our to-do list finishing the grape arbor did not become top priority until last spring. Each year as the vines grew we would stake them and/or fence them in attempts to keep them growing upward and prevent the deer from annihilating them. (notice the grape vine tied to a stake in the picture below) Each year we have harvested modest crops, some years better than others. 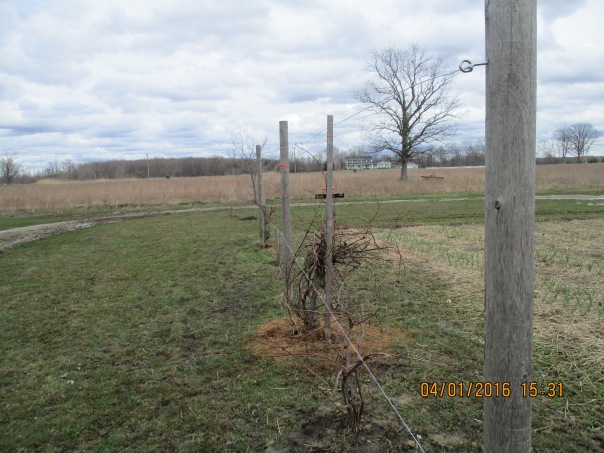 As with all of our crops this year the grapes did require watering, but the fact that they escaped the fate of the deer can only be counted as a gift from God. Our first harvest weighed in at about 20 lbs. I decided to turn this into juice. 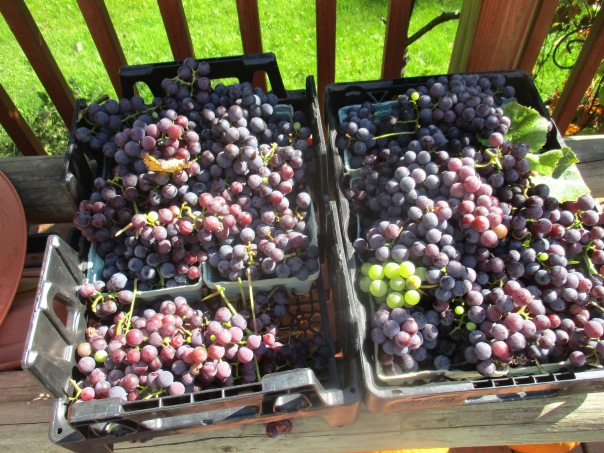 In the past I have made grape juice according to these instructions from the National Center for Home Food Preservation http://nchfp.uga.edu/how/can_02/grape_juice.html and while the juice has good flavor I always feel guilty about wasting the pulp, skin and seeds. Last year I canned the juice without allowing the sediment to settle out and found that the juice was thick and delicious. This year I decided to have even less waste. Here is what I did.

Wash grapes and remove them from the stem. I make a point to wash and inspect each individual grape because little spiders like to make their homes amongst these grapes and I sometimes find spider nests attached to them. These must go!

Put the grapes in a pan and mash them with a potato masher.

Bring to a boil and cook for 10 minutes. 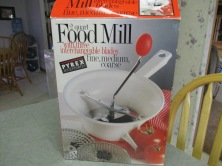 I then ran the grapes through this food mill. I used the medium blade which filtered out seeds but turned the pulp and skin into juice. Pretty much the only thing that was not turned into juice were the seeds and judging from the crackling sound of grinding grape seed small particles of seed may have ended up as juice as well. I am ok with this. No, actually, I am very happy about this. You see the grape skin and seeds are said to be the healthiest part of the grape. https://www.livescience.com/54581-grapes-nutrition.html  After juicing the grapes in the food mill I proceeded to can the juice according to the NCHFP link above. I did not add any sweetener to the juice as my husband prefers the tartness of the natural juice and to sweeten my juice I add a bit of our raw honey before I drink it. This 20 pounds of grapes yielded 7 3/4 quarts of delicious, thick and healthy grape juice.

After harvesting the first 20 pounds of grapes there were still some grapes left on the vines. I wanted to experiment with making a wine without adding yeast and decided that using grapes was the way to go. I did an internet search and came across this recipe http://www.roughdraftfarmstead.com/2012/05/24/easy-homemade-wine-recipe/ .

I harvested the remaining grapes and while the recipe calls for “preferably unwashed fruit” I had to make sure there were no spiders or spider webs left behind and rinsing them under running water seems the best way to do this. After I rinsed the grapes and removed them from the stems I had about 5 lbs. of grapes. I decided to let them sit for a few hours in hopes of reclaiming some of the yeast that I had rinsed off.

The mashed fruit did not nearly fill up my two gallon crock so I decided to add enough water to just cover the fruit. I also added about 1 1/2 cups of our raw honey. I stirred the mixture and covered it with plastic wrap. I didn’t stir the mixture nearly as often as is recommended in the recipe but at least once a day. In a few days I could tell that fermentation was underway. The bubbling was not as apparent as when I have added yeast to make wine, but when I stirred the mixture the bubbles were there and it had the smell of alcohol. I also tasted the wine as it fermented by sipping whatever drops remained on the spoon after I stirred it. The grapes fermented in the crock for approximately two weeks before I had time to siphon the wine into a one-gallon bottle. I placed a balloon over the top of the bottle but after a couple days of the balloon not rising and no apparent bubbles I decided the fermentation was done. I could have transferred the wine into bottles and corked them but the wine seems to be disappearing (not evaporating) quickly enough that this would be a waste of time.

Personally I am not much of a wine drinker, and when I do imbibe I prefer a sweeter wine, so I am not the best person to judge this wine, but if you want my opinion I would say it is a “good” wine. It’s definitely not a “fine wine”  and in my opinion it is not nearly as delicious as the grape juice. My husband, who likes dry wine, is  enjoying it, and I have been drinking a glass now and then for it’s health benefits.   https://www.prevention.com/health/healthy-living/health-benefits-of-red-wine/slide/9

I consider this experiment a success. I can indeed make wine without added yeast and I plan to experiment more with this process more in the future.