In the 17 years we have been together my husband and I have never been to a Halloween costume party before.  A few weeks ago we received a flyer in telling us that our community was having a Halloween party with food, games, and prizes for the best costume. I set the flyer aside and didn’t think much about it until a few days later when my husband, who had been weeding the strawberry patch all day, told me that he knew what he was going to dress up as for the party.

When he shared his idea with me I thought that it was very clever and would be a lot of fun. I wasn’t surprised that he came up with this cute idea because when you spend all day on your hands and knees pulling weeds you really do have a lot of time to think. Pulling weeds is a very mindless task. I am glad he didn’t want me to guess what he was planning because even though I was certain it would be farming related and that it wasn’t going to cost much, if anything, I would never have thought of this (unless maybe I had spend all day on my hands and knees pulling weeds).

He told me he was going to be a Boo Keeper – think Bee Keeper + Ghost Buster. “I’ll wear my bee suit and carry a net and have little ghosts flying around me and some in the net,” he said. My wheels started turning and in my mind I already had the little Kleenex ghosts made.

About a week later my husband asked what I was going to dress up like for the party. I was just thinking of putting together a scare crow costume out of some of the clothes I have on hand. “You could be a Boo Keeper too he offered, or how about the Queen Boo.” Okay, I liked the idea of Queen Boo. We created both of our costumes mostly with things we had on hand. So here is what we did.

We decided to make them bee-like so I first used markers to put some black and yellow stripes on them. When I went to my craft supplies I discovered that I had some Styrofoam balls that were the perfect size for the head. If I did not have the Styrofoam balls I would have just balled up a piece of newspaper. I centered the Styrofoam ball on the Kleenex then gather the Kleenex around the ball and tied it with thread. I think I learned to make these little ghosts when I was in grade school. I left the thread long enough that I could thread it through a needled and attach it to the costume.

I then cut some wings out of tissue paper and glued them on.

Our little ghost bees became known as boo BEES. Warning: Please be careful how you pronounce that lest you get the wrong idea.

My crown was made of poster board. I wanted it to have a honey comb pattern. To make the honeycomb pattern I decided I could use a wax foundation that we use in the beehives. The bees use these foundation as a base for building their comb. Since the poster board was too thick I decided to use printer paper the make the honey comb design. I placed the printer paper on the wax foundation then colored over it with a brown crayon. 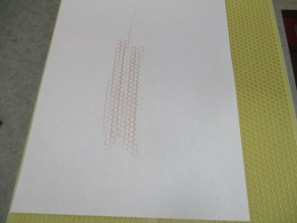 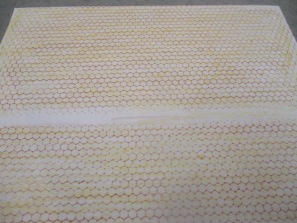 I then  removed the paper from the foundation and colored over the brown honeycomb with a yellowish crayon to give it a honey-like color. I glued the printer paper onto the poster board strip then waited for the glue to dry before cutting out the crown points. I fitted the crown to my head and used tape to hold it’s circular shape.

My husband suggested using glitter on the crown to give it some glitz, but I don’t do glitter. In my personal opinion glitter is an invasive species. Once glitter is introduced into an environment it will spread like wildfire and it seems you will spend the rest of your life trying to get rid of it.

I wore a black turtle neck and black leggings with an oversized white t-shirt that I picked up at Joann Fabrics for $3.00. My husband wore a pair of Tyvek coveralls that he had on hand, then put his bee suit over top. I attached some of the boo BEES to his suit and net and attached some of them to my t-shirt as well. (It’s the worker boo’s job to protect the queen.)

I put on some white face paint to look more ghost-like and my husband picked up some Bit-O-Honey candies for me to pass out.

Here we are at the party on Friday evening. 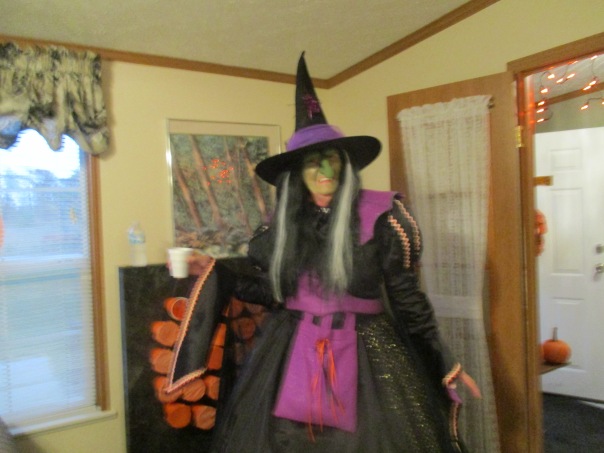 I love that we were able to put a Halloween spin on something that we do in our daily life and were able to create the costumes at little expense. The only money we actually spent on these costumes was the $3 for my t-shirt and a few $ for the Bit-O-Honey candies.

We enjoyed a fun time with some of our neighbors but had to excuse ourselves as darkness fell and duty called. Once out of public eye the Boo Keeper mysteriously morphed into Chicken Farmer and rushed off to close the chickens in the coop where they would be protected from any dangers that were lurking in the darkness.

Note: This is  not an advertisement but years ago I discovered that I can often find t-shirts on sale for $3.00 or less at Joann Fabric. At that price it was worth stocking up so when the kids were in school I would keep a supply of these shirts in various colors. When the kids would come home from school needing a special color shirt for a school activity or project I usually had what they needed. These shirts are designed to be used for craft projects such as tie dye, painting, iron-on, cross stitch and more but are also suitable for wearing just as a regular t-shirt. I in fact have a few in my wardrobe.

I would love to hear your creative ideas for Halloween costumes. Have you ever added a ghostly or funny twist to something you do everyday? Have you made a clever costume out of things you have on hand? Please share your ideas in the comments section below.

Thanks for reading and Happy Halloween!

11 thoughts on “Our Homemade Halloween Costumes”