There are so many things going on that I have wanted to write about but it seems there has little time left for writing. Thankfully I have been taking some pictures along the way to remind me of what I want to write. I have decided to combine many things into this post.

I will start with an update on my sourdough bread making.

This loaf was made the same as my previous breads but I reduced the oven temperature to 425 degrees F and baked it covered for 35 minutes. I then removed the cover and baked it for about 25 minutes more. I am very pleased with the results. 🙂

SPRING AT THE FARM

It seems like a slow transition into spring but it may be better that way. When warm weather comes on quickly and all the plants begin to flower there is an increased risk of losing them to a spring freeze or heavy frost.  Here are some of my observations of our world awakening from it’s winter nap.

The hickory buds are swelling.

The maple trees are flowering. They provide pollen for the bees. 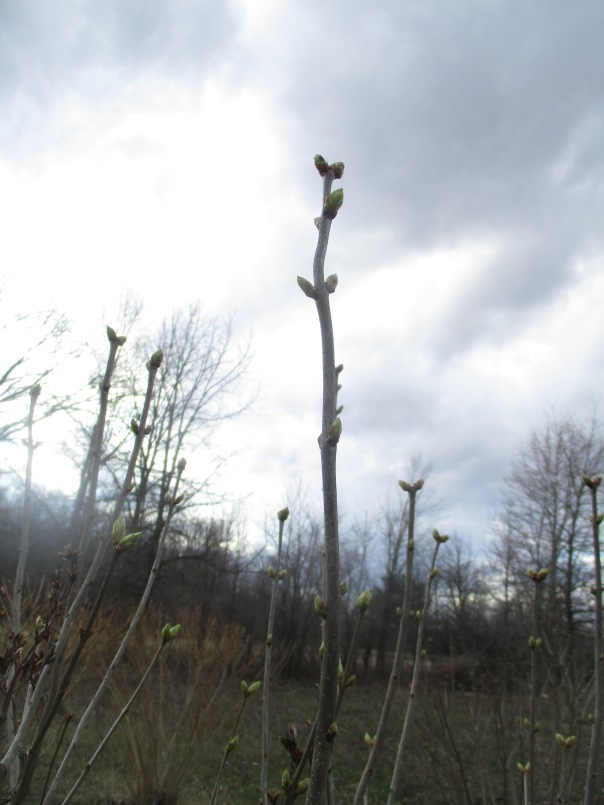 The lilac buds are getting ready to open.

The garlic is about three inches high. 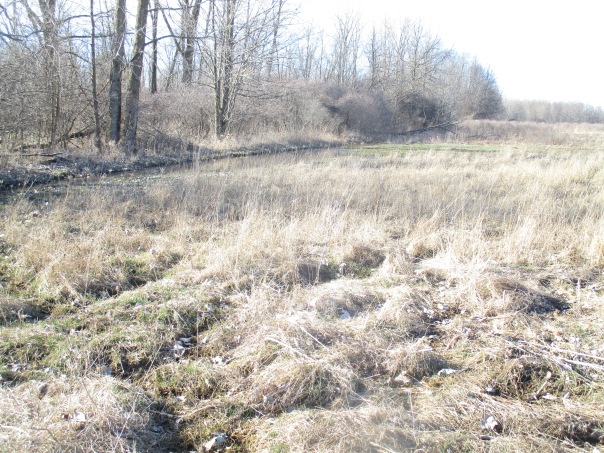 This time of year the back corner of our farm is a swamp. It becomes the noisiest spot as the chorus of frogs announce the arrival of spring. I love to hear the frogs sing 🙂

While it is way too soon to do any outdoor planting. We have a lot of stuff growing indoors. 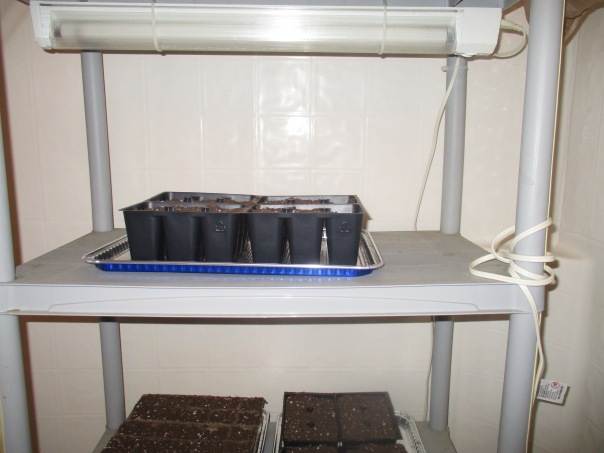 Several years ago we constructed this grow shelf by attaching florescent lights to the underside of  each shelf . As the seedlings begin to sprout we place blocks or boxes underneath their trays to get them closer to the light. We then gradually lower them as the plants grow taller.

Having them closer to the light helps them grow stronger stems. We also have plants growing near many of the windows in our home.

While I normally don’t plant many annual flowers this year will be different.

My husband took a job at a greenhouse for the season. They are a wholesale supplier of annual flowers. For various reasons not all of the plugs make the cut, so my husband has rescued many that would have otherwise been discarded.

We shared some with neighbors and family members and even donated several flats to our friends at Special Dreams Farm. Once the weather warms I will be planting Marigolds, Geraniums, and Phlox in our flower beds.

This year our son-in-law, Ken, decided to become a bee keeper. Since he does not have property of his own to set up a hive we welcomed him and his bees to our farm. Ken said he has been reading about and studying bee keeping for a couple of years now. After doing so he decided to design and build his own hive and feeders. I can’t describe all of the bee-friendly features that this hive has, but if it works out well perhaps Ken will do a guest post to share his hive design.

He decided to keep Buckfast bees, a breed that we are not experienced with. His bees arrived on Saturday, April 6 and we were blessed with perfect weather for hiving bees. Since the Buckfast bees are known to be a gentle/non aggressive breed Ken was comfortable not wearing a full bee suit. (He only got stung once.)

My husband was there and walked Ken through the process of hiving the bees. When I spoke to Ken later he said that he was thankful for the help and probably the best thing my husband told him was to take his time. I understand this because standing amidst  10’s of thousands of bees can be unnerving.  It is important to stay focused and not to rush to get things done. That is how mistakes happen.

Our hive is doing well as evidenced by the number of bees coming and going on warm days. Since there is not much in blossom for the bees to forage my husband set up an outside feeder for them.

He poked small holes around the bottom of the ice cream bucket. He then put honey in the bucket. The honey is thick enough that it does not run out of the holes but the bees can suck it out.

We have ordered five packages of bees. They are scheduled to arrive on May 10th so I expect I will write a post about setting up five new hives.

I saved the best story for last.

Our first batch of chicks, the ones I said won’t be with us long, have moved to the farm. We had decided that once they were out of the brooder we would get a second batch. Rather than the Cornish cross chickens that we got the first time around and are normally raised for meat birds we decided we wanted a breed that would forage for it’s own food.  Jersey Giants was the breed we selected. I had spotted some recently at our local farm store. As their name suggests Jersey Giants are said to be the largest true breed of chicken. They are know as dual purpose birds being raised for either egg laying or as meat birds.

Our plan was to go last weekend to get some but that just didn’t happen, so when Monday came around I offered to go get them, “or we can go when I get home form work” my husband suggested. We eventually decided he would stop on his way home from work to get them. “How many should we get?” he asked. “Eight?” I said. “Eight sounds right,” he agreed.

When he got to the farm store and found the brooder containing Jersey Giants he discovered there were only eight left. Perfect timing!

While he waited for the customer service person to assist him, he noticed a women holding a very small chick. “The others were picking on it,” she told my husband as she showed him the sore area on it’s foot where they had been pecking at it. “My husband won’t let me rescue it,” she said.

“My wife will,” he replied as he took the tiny bantam chick from her. “Let me take this one home,” he said to the store employee. She agreed.

We have never raised bantam chickens before so I had to do a little research to find out what we had. I learned that bantam chickens are small breeds. There are several breeds that are “true” bantams but each regular breed of chicken also has a bantam variety. Other than a small incredibly cute chick I still have no idea what we have. In fact these chicks are not sexed before sale so we may even have a rooster.

It seems a dichotomy that this tiny little chick that was being abused by it’s peers has been accepted by this group that is 3 or 4 times it’s size.

“You get to name it,” my husband said to me.

“Pick a name that could be either or,” he said.

After a few minutes of thought it came to me… 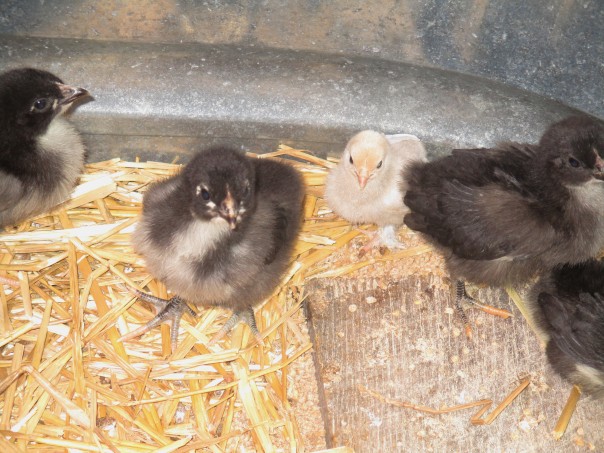 Let me introduce you to Big Bird! LOL.

Do you also feel like time is flying by?

Are you experiencing nice spring weather and the beauty that comes with it?

23 thoughts on “Life Is Happening Faster Than I Can Write”