Perhaps this post should be sub-titled “The Good, The Bad and The Ugly” because we have seen a bit of each this winter.

The chickens mostly fall in good category. Egg production slowed down in late November as usual and we were only getting 2-4 eggs a day, but as the hours of daylight have been getting longer egg production has been gradually increasing. We are now gathering between 7-10 eggs a day. We had more than enough eggs for us, so we didn’t have to buy any this winter. The lack of snow this winter has made the chickens happy because they tend to stay inside when there is snow on the ground.

The bad, or at least sad, part is that our rooster died on Thanksgiving. He was one of three birds left from our first batch of chicks we got in 2013. Toward the end of summer we noticed that old age seemed to be catching up to him, so we were not surprised by his death. So far the flock seems to be doing well without him. I was never especially close to Cocky because he seemed to feel that he had to protect his flock from me. I did learn, after being spurred in the leg by him a couple times, not to turn my back on him. We sparred many times over the years, but I did respect him as protector of our flock. While I don’t miss having to look over my should when I’m in or around the chicken yard, I do miss hearing his Cock-a-doodle-do’s.

Bees fall into the UGLY category. At the end of summer we had eight hives most of which seemed to be thriving. Over fall and winter we have lost all of them. We are baffled as to why the bees are dying. Every hive has had lots of honey in it, the hives have top ventilation to prevent moisture build up and our winter temps haven’t even been that cold so it doesn’t make sense that they are freezing to death. Some even died before temperatures got cold.

It is sad and it is frustrating to have so many losses, but we have decided not to give up yet. We have ordered three more packages of bees to arrive in May so we can try, try again.

At this time it seems that the garlic falls into the good category. The new location seems to be good since despite lots of rain and snow melt we have not had any flooding in that area.

The main reason that I am including garlic in this update is because several readers were interested in knowing how the weed guard that we used when planting the garlic worked out. (You can read about it here.)  Unfortunately it did not work out as we hoped it would. All was well until after the first big snow storm in early November. We then had a warm up, and as the snow melted, the weed guard became saturated. Then we began seeing rips in it. It seems the wind was getting under the exposed edges and ripping the wet paper. It became so tore up that we ended up removing it completely and mulching the garlic with straw before the ground froze.

If we use this product in the future we now understand it is important to make sure all of the edges are secured – perhaps by burying them in the soil.

This is another one for the good column. This new addition is currently under construction. It has come a lot farther since this photo was taken last week. Our plan is to have it ready so we can start our garden plants in it this spring. I plan to write a post on it’s design and construction once it is complete and will likely write about it’s uses in the future as well. 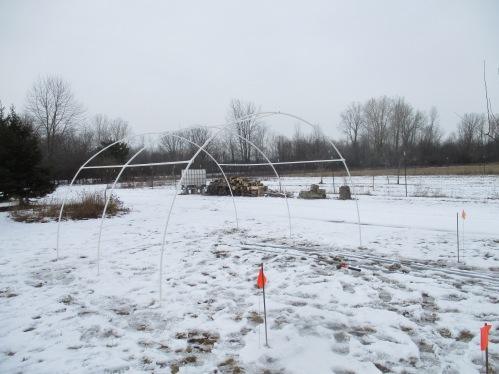 The boy’s also fall into the good category. Most of our time at the farm this winter has been spent with the boys, more specifically training Ranger.  This pup has so much energy that it is important that he get out and use it up. We have found that he requires a minimum of two hours a day outside, but on most day it’s three or more hours of walking, running and hunting.

We have been using a training collar that has three settings – a beep, a vibrate, and a shock. The collar, along with voice commands, is working well with training him to stay on our property, but it is going to take a lot more training and time before he can be trusted not to leave the farm. Beagles have a strong hunting instinct and if they pick up the scent of a rabbit or other small animal (there are many on our farm) it is difficult to call them off.

We are not hunters so we will not be training to hunt rabbits or squirrels. 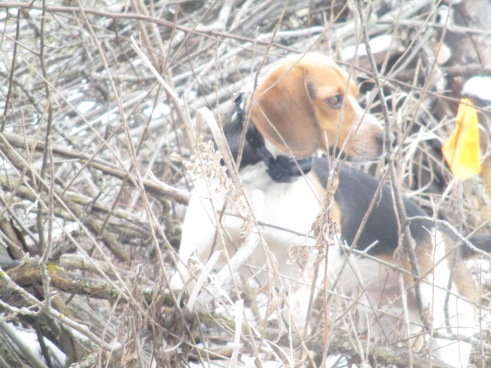 He and Trooper do enjoy hunting for field mice together. This is something that Scout and Trooper would do for hours at a time and we are happy that Ranger has become Trooper’s new hunting buddy.

Watching the boys hunt mice can get a bit boring, but it is interesting to observe how they work together.

Trooper who is mostly a watch dog uses both his nose and eyes for hunting.

Ranger, who is a hunting dog, primarily uses his nose.

So while Ranger has his nose buried in the dirt trying to sniff out his prey Trooper might capture it as he sees it trying to escape.

After consulting with our vet we did have the boys immunized against diseases that they could catch from mice.

I think it is largely as a result of all this outdoor activity that Ranger has become such a great house dog. While at home is is content to settle into his or our bed for a nap, or he might seek out a little cuddle time from one of us. If he does get bored he will find a rawhide to chew on or bring his ball for a game of catch. He does however let us know when it’s time to get out a expend some of the built up energy.

A couple of weeks ago we decided to put him to the test. We needed to go grocery shopping so thought we would see how well he would behave if we left him out of his crate for a couple hours while we were away. Our strategy was to make sure he was tired out first, so my husband took the boys to the farm for about an hour before we went shopping. Before we left for shopping we also made sure that some of the things that might be tempting to a puppy (shoes, slippers, books) were out of his reach.

We were so happy when we returned home and found the house in the same condition that we left it in. The Boy’s, especially Ranger, were rewarded with lot’s of “good boy’s” and another nice long walk (run, play, hunt) at the farm. We have since left him  on three more occasions and have come returned home each time to find that he was a “Good Boy”. 🙂 It may be time to get rid of the crate.

How has your winter been so far?